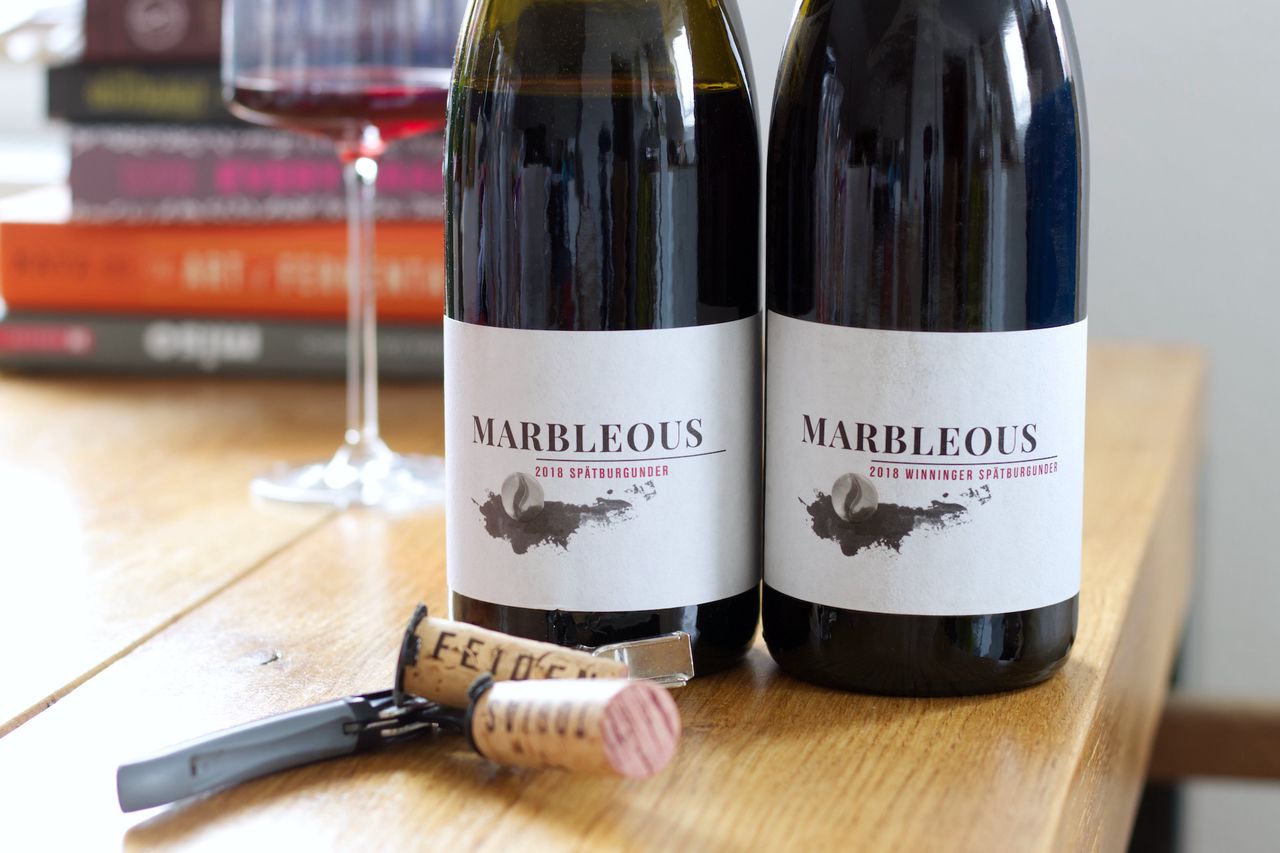 As announced, we remain at Christmas on the Mosel too. But somehow I feel that red is much more fitting than white for this occasion, even if it feels outside more like autumn than winter. Since red wine cultivation was still prohibited on the Mosel until a few years ago, red vines are still relatively rare. In complete defiance of this, Tobias Feiden grows only Pinot Noir at his Marbleous winery. The vines for this are only on half a hectare around Winningen on the Terassenmosel and that the grapes can become wine, he uses the cellar of the winery Materne and Schmitt. Rebecca Materne is the partner of Tobias, so the possibility of cooperation is of course obvious and since I like the Rieslings from exactly that cellar very much, I hope the same will be the case for the two bottles today. The wines are fermented spontaneously and, after maceration, aged for a year and a half in used French wooden barrels. We drink the Spätburgunder Unfiltriert, the entry-level wine in the range, and one step above that we also try the Ortswein from Winningen. Both are from 2018, a year that is often said to have produced really good red wines. Let’s see.

To get to the wine you first have to pass the wax capsule. Here, however, this was very cooperative and the screw simply pushed through and I was able to pull the capsule including the cork easily. We start with the Unfiltriert. And it has a really beautiful fruit right from the start. Berry, red, deep, complex with some herbs. The acidity is there, but very gentle and soft as is actually the whole wine overall. This is somewhere between velvety and creamy in terms of texture but still has a bit of edge to it as well. It’s not fat, but it’s not a super lean ascetic one either.

And a day later, it remains that way. The fruit continues to be a real highlight. Meanwhile, the wine has a bit more wood on the nose and a bit of cherry candy. Along with the freshness on the tongue, this is a really strong entry.

The Winninger is darker on the nose, more tart and seems more serious. Which is not to say that the entry lacked seriousness. Here, however, is clearly more of it. There’s fruit too, but there’s clearly more going on around the fruit. There’s some wood and lots of herbs. And it’s noticeably more tart in the mouth as well. There’s less fruit on the tongue and the tannin has more pull. The acidity is similar to the Unfiltriert, but there’s a helping of more depth and complexity throughout. And like the entry, this is zero fat but just not completely reduced either.

What is quite noticeable, in my opinion, despite the differences, is that both wines have a common signature. The way these wines are fruity is very similar, albeit in different doses, and the texture on the tongue also gives you that feeling. The Winninger puts the fruit a tad more in the background on the second evening. The nose has become dirtier and the texture more intense, this is now super long, juicy and structured above all. The tannin is still nicely integrated, but now has more traction and resistance. It also is still very young of course. I like the bit of resistance it puts up now quite a lot. Two great Christmas wines.