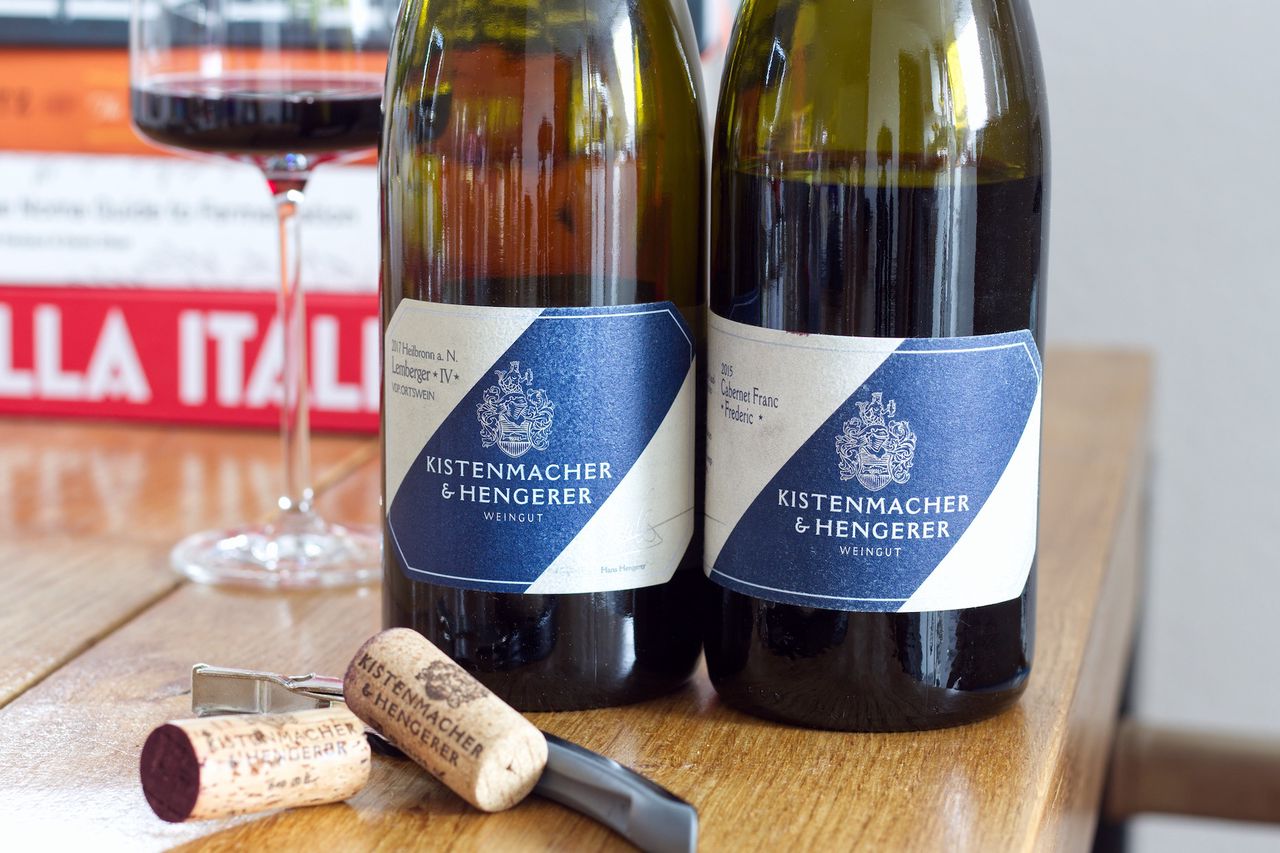 Once again, I felt like thematically coordinated drinking. Therefore, we use September and will open four wines from Württemberg. This is anyway a bit of a favorite area of mine, since it is also my home. The Kistenmacher & Hengerer winery is located slightly east of Heilbronn. The history of the winery goes back to the 15th century and already in 1967 they decided to bottle and market wines themselves. In the 90s, Hans Hengerer took over the helm, who is still responsible for the wines today. Meanwhile, however, together with his son, who wants to continue the winery in the future. Since 2013, the winery has been a member of the VDP. We drink, how could it be otherwise with wines from Württemberg, a bottle of Lemberger IV from 2017. The IV says that the vines have four decades on the hump and since that is also already 5 years ago, that should probably become V sometime soon. We also drink a bottle of Cabernet Franc Frederic from 2015, a grape variety that is rarely found in Germany, but which I like quite a bit from the Loire.

We start with the Lemberger. The nose has red fruit and berries mixed with some spice. In the mouth, not much happens at first, until a good portion of tannin comes out the back. When that disappears, it feels like eating currants after chewing on the seeds for too long. I like that. A little air does the wine a lot of good. There’s more going on in the nose now, there’s some hibiscus and somehow an idea of banana. That then disappears again and is replaced by smoke. The Lemberger feels cool and straightforward.

A day later, the wine appears more intense and dirty on the nose. There is a bit of plum and cherry, but the fruit is more in the background. Further forward is spice and spices, there is something ethereal and a little bit of smoke. The tannin has softened, seems less pithy and is well countered by the fresh acidity. Now this is not necessarily the most uncomplicated Lemberger to sip on a Viertele on Sunday. But definitely one that is a lot of fun and will certainly continue to develop great for a few more years.

The fruit in the Cabernet Franc seems quite different. Rather dark, very ripe berries are there. The wine is charming and a bit dirty. On the tongue it then seems brighter than it had announced on the nose. The tannin is different than in the Lemberger, but definitely present as well. It seems a bit scrubby, as Cabernet Franc often does. Quite juicy it is also and now has a great raspberry fruit. What he has but somehow not at all is the light green bell pepper, which I often smell in Cabernet Franc. Instead, there are cassis and a portion of hay, and towards the end you think you can smell a tiny bit of green. Or at least imagine it. No matter, because it is good in any case.

A day later the green bell pepper is there then also without imagination. I could hang my nose in the glass for hours. The great fruit, the little bit of dirt and also the freshness and the scrubby rustic appearance are just superb. I could write now that this is the best Cabernet Franc from Germany that I have ever tried. And that’s true, but I can’t think of any other that I’ve consciously tasted. Therefore, that would not be particularly meaningful. What I can say, though, is that I think it will be able to defend that rank for quite a while. This has matured beautifully and, like the Lemberger, will still have a few years ahead of it. And that for well under 20 euros. I am thrilled.