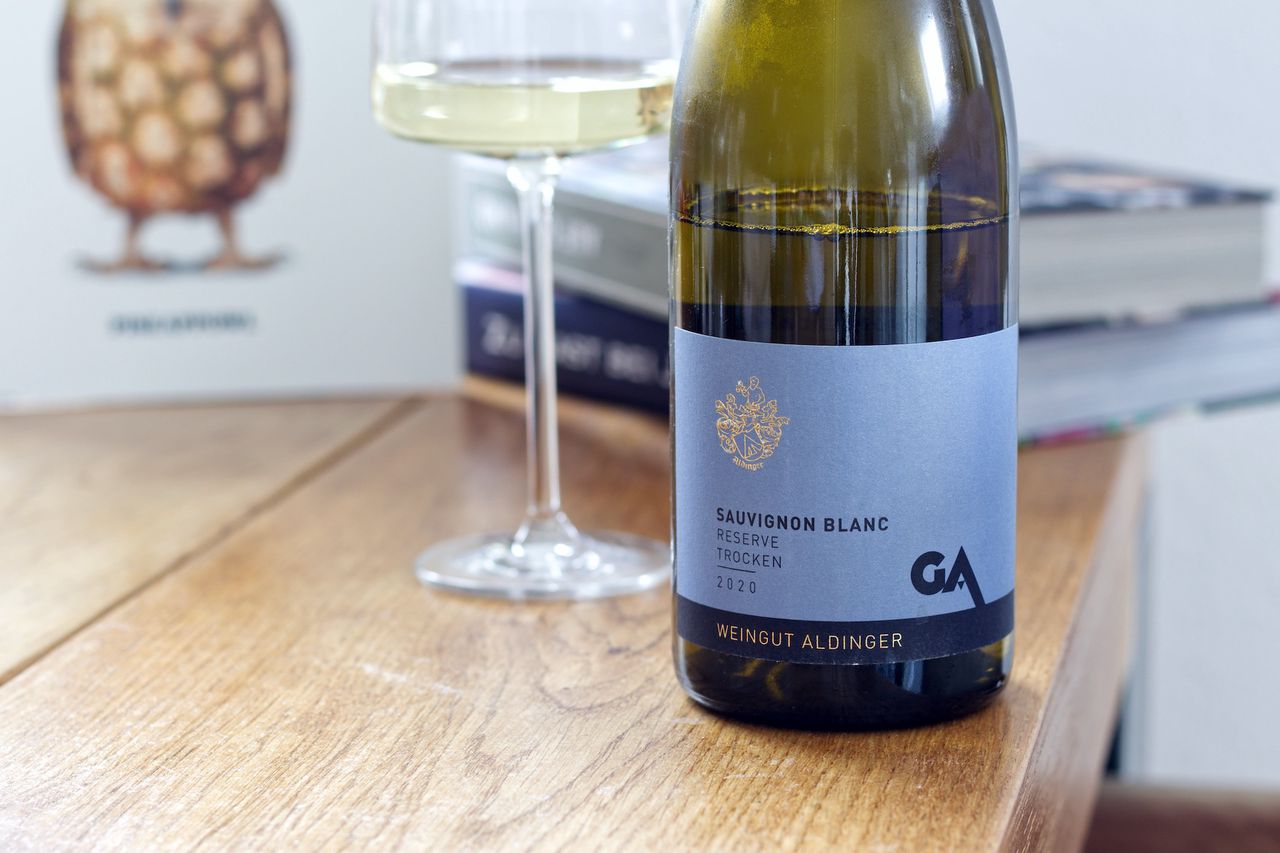 At the end of the small Württemberg series in September, two bottles of Sauvignon Blanc were actually planned. But there are just things you can’t control and the second bottle had a quirk unfortunately. And since Sauvignon Blanc and I are still not the best of friends despite all the positive experiences, I simply did not have another bottle in the cellar. Therefore, the Sauvignon Blanc Reserve from the year 2020 from the winery Aldinger may now simply compete as a soloist. By the way, it has a screw cap. That makes opening a bit clumsier, the picture a little bit emptier due to the lack of cork on the waiter’s knife, but makes me much more sure that I can drink what I buy without having a faulty wine. A tradeoff I would gladly make with every bottle. The 30 hectares of the winery around Fellbach and in the best locations in Württemberg are managed by Hansjörg and Matthias Aldinger in what is now the 16th generation of winemakers. The grape variety with the largest area share in the winery is the Riesling, Sauvignon Blanc lands with significantly less than 10% only in the back places. The Reserve is the smaller of the two variants on offer. While the larger one matures in concrete egg, the Reserve lies for the most part in the steel barrel with a small portion from the Barrique. There it may lie until about April of the year after the harvest on the fine yeast until it is then filled.

On the one hand, the wine smells distinctly of Sauvignon Blanc, but then fortunately this has nothing to do with the fruit bombs that I fear so much. Yes, there is cassis, passion fruit, green gooseberries and a bit of green bell pepper. But this is so elegant, fine and bright, almost delicate on the nose, that I really like it. In the mouth, the wine is super fresh and also has a good amount of gooseberry and green bell pepper going on. There’s also a bit of minerality coming out the back and the feeling you get on your lips from the salty air by the sea.

After a night in the fridge, there’s more cassis and also a touch more green bell pepper. In the garden here we grow red gooseberries, which, if they are allowed to hang long enough, become really fruity ripe and then taste so intensely gooseberry that you ask yourself afterwards with each purchased gooseberry whether that is a gooseberry at all. And somehow exactly this gooseberry note is here also in the wine, only without the sweetness. On the tongue you have a crisp green apple and further the minerality. This has bite and is intense, fruity and stony at the same time, but never one-dimensional or clumsy or overloaded but always perfectly dosed. This is really good and thus a very conciliatory conclusion both of the evening and of the small round through Württemberg. It will not have been the last one.