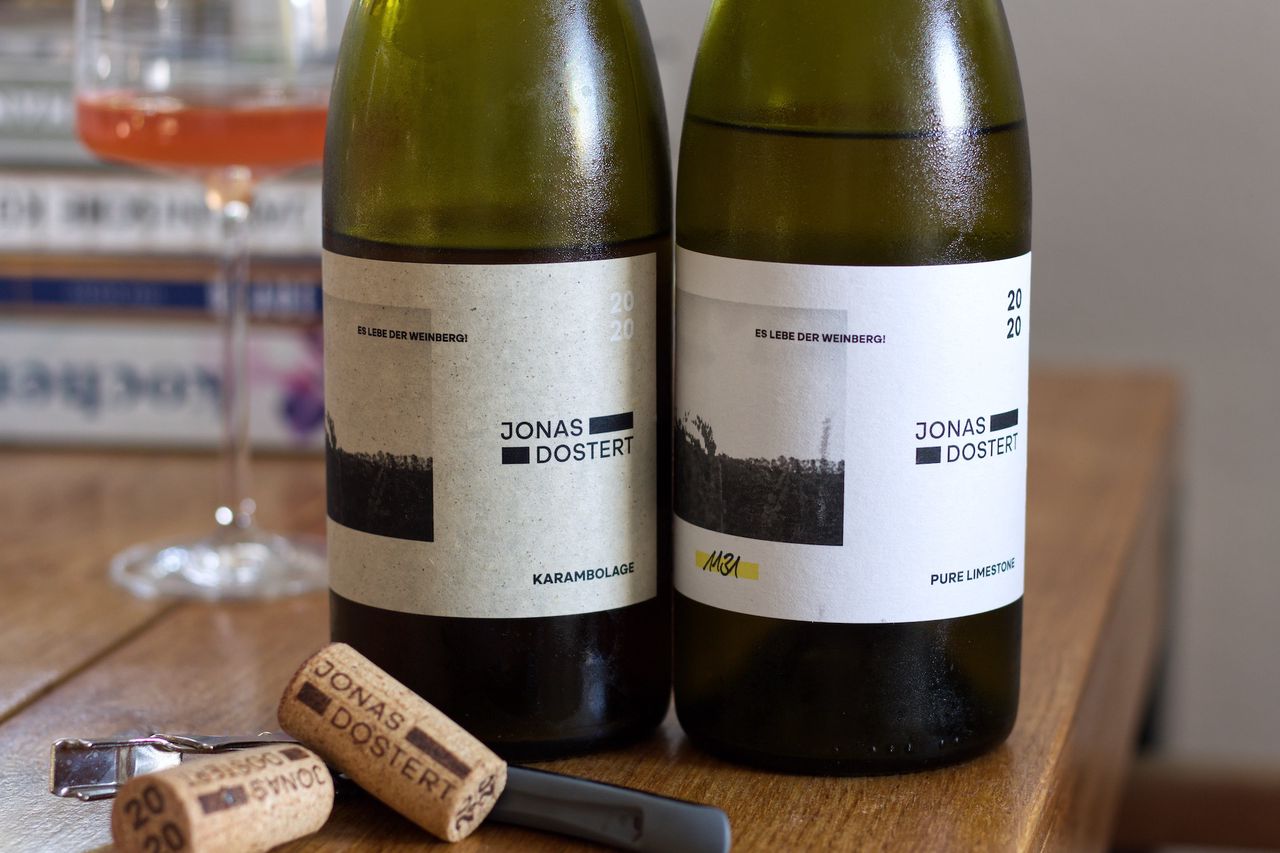 The Upper Moselle behind Trier on the border with Luxembourg probably does not really appear on the wine radar for a lot of people. We’ve had wine from there before, but I don’t really have that in the glass very often and if I’m honest, I don’t really know any other wineries from there either. We are on the Mosel but the vines grow on shell limestone and not on slate and it is Elbling instead of Riesling. Jonas Dostert makes his wine in Nittel and only bottled the first vintage in 2018. And also Nittel doesn’t necessarily have the ring of Brauneberg, Wehlen or other places on the same river. Jonas Dostert still isn’t really an insider tip anymore though. Everywhere I have read about the wines, I have read only good things and everywhere I wanted to buy the wines, they were sold out. It has then still worked out and so we can drink two wines from Jonas. The Karambolage is a cuvée of one half Elbling and one half Pinot Gris, which brings the color into the wine through the dark skin. For this to happen, the wine sits on the skins for some time and is then bottled without sulfur or filtration. As you can reasonably guess from the background of the cover photo, you can certainly argue with the resulting color whether this is still white wine or already rosé. I find the color superb. The Pure Limestone is with about 1700 bottles even a bit rarer than the Karambolage with its 4000 bottles. Surely also a reason why the wines are gone so quickly. The Pure Limestone adds to its half Elbling another half Chardonnay into the bottle. Both wines are vintage 2020.

Contrary to the funky color, the Karambolage doesn’t smell that funky. Sure, there’s a bit of apple skin and natural touch, but there’s also a lot of citrus, something reminiscent of lemonade and a good dose of herbs. The acidity is great, this has tremendous draw, is salty, has a lot of freshness and a little bit of tannin. After having the wine in the mouth the nose becomes extremely ethereal and with air it becomes more elusive. This is a more than successful start.

A day later, the fridge temperature is a bit too cold. It somehow doesn’t like that and hardly anything happens at first. But fortunately, a temperature that’s too low is something that resolves itself relatively quickly. Then there are a few sour peach rings, some dirt, a little bitter note and further the herbs. This is going to sound silly, but this somehow conveys the idea of funky natural without being really funky natural. Maybe because you kind of expect that with the color and mash time, maybe because there really is something in it. But at the same time, it’s super clean and clear. The acidity and texture are, completely independent of funky or not, quite amazing. It’s called Karambolage, but it rides along the palate very smoothly. I would say natural for beginners, but certainly not only for beginners.

The Pure Limestone starts its first moments completely fruitless. Then with swirling, however, citrus enters the wine, though much brighter than in the Karambolage. Somehow it also smells a little bit like cake. In the mouth, the wine reminds me of Chardonnay from the Jura with lime and lots of stone. This is fresh, clean and straightforward and the acidity really pulls the cheeks in. Extremely strong this is. With more air and temperature, the wine softens and becomes a bit creamier. There’s so much going on, you can sit down and explore. You should, as the wine deserves the attention and then rewards it.

And the Pure Limestone also likes it a little bit warmer on the second day (and the first, of course). Too cold doesn’t bring out the flavours as much and it seems kind of aggressive. Again, the problem solves itself. The cake note is gone by now, there’s some melon rind and minerality now. That’s good, but what’s really good is what it does on the tongue. The acidity is quite different than in the other wine, brighter, with more zing and more lemon. It all has much more power than the low alcohol, just 11.5% in both of them, would actually suggest. And I really like that when wines with low alcohol still deliver such a punch. I’m actually a bit in love with this wine and I know I’m not the first to write that and I know that’s a bit silly, because buying won’t get any easier. Right now, however, there is still wine avaibale. I have ordered again. And whether the list of wines, which I pursue, is longer by two entries or not, doesn’t really matter in the end anyway. In any case, these two are really good.