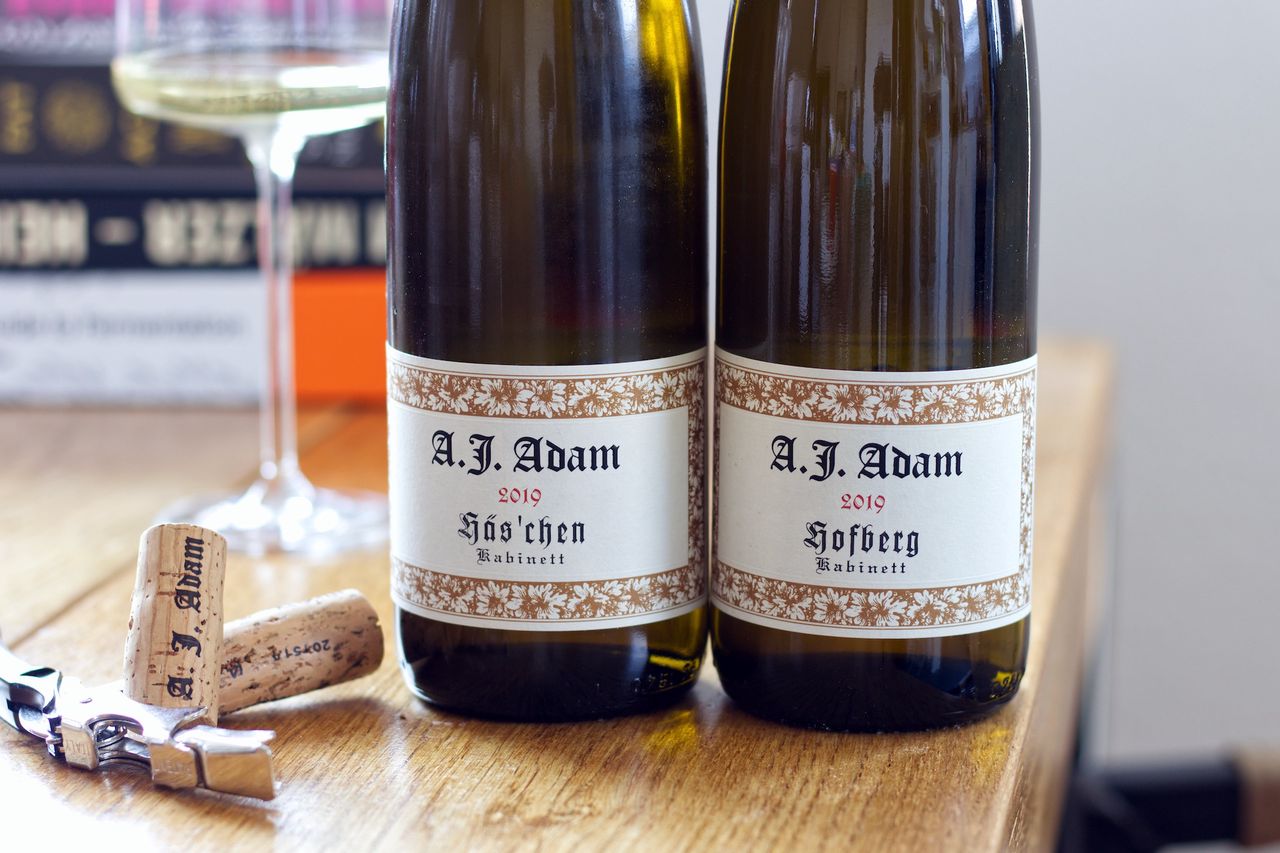 There appeared once again the desire for Riesling, which wanted to be satisfied. And Moselkabinett actually does this job pretty well most of the time. Light residual sugar, crisp acidity and lots of stone are usually a superb combination. So we drank two bottles of Kabinett from the Mosel from the A.J. Adam winery in Neumagen-Dhron. We last had the wines of A.J. Adam in the glass at Mythos Mosel. That was also the last time we were visiting the Mosel region. Pandemic and all, you know. How fitting that we are drinking these wines now, when this year there is a legitimate hope that we too will return to the Mosel. The winery as it is now started operating with the 2000 vintage and the vinyard Häs’chen, which is fully owned by the winery, was added even later to the property in 2014. So everything is still quite fresh. And also the bottles in the picture are actually no longer correct. An eagle is missing on the capsule. A.J. Adam is a member of the VDP now since the 2020 vintage. The winery is managed by the siblings Andreas Adam and Barbara Gudelj. As everywhere on the Mosel where the vines grow on extreme slopes on slate soils, viticulture here means hard work on steep slopes. The site Dhroner Häs’chen can also offer another special feature: Here are still ungrafted vines on the slope. Normally, vines in Europe grow on a rootstock that protects them from phylloxera infestation. Here, however, the vines stand on their own two feet, so to speak.

We start with the Häs’chen. The Riesling still has a slight stink to it. There’s a lot of stone and minerality and lots of flint on the nose. There is also some light yellow fruit. On the tongue we totally taste a lot of grapefruit and towards the back there is a nice structure to it. The citrus is really well done and does a really good job with the fruity acidity.

Even with a day of air, the wine stinks charmingly. Now there are herbs on the nose and more yellow fruit. It has almost more pull on the palate than it showed on the first night already. The acidity really has power here. As the stinker slowly airs itself out of the glass, it makes way for some buttery caramel, which is a great match for the acidity. Minerality, citrus and buttery caramel. A great Kabinett.

The Hofberg has much darker minerality and more spice and structure compared to the Häs’chen. The fruit is also darker and seems a bit riper. In the mouth there is less citrus and also a bit less pull. The wine seems a bit creamier and the structure is also nice but just struggles a bit in direct comparison.

On the second evening, we have a lot of mango on the nose and also on the palate. The acidity seems tamer overall. I don’t even know if there is actually less acid in the wine, but the acidity that is there doesn’t pack as much punch as in the other wine. In the meantime, however, I see the two wines on par. The Hofberg is a bit of a nice guy and the Häs’chen more impetuous and direct. Both are fun and both show clearly why it must sometimes simply be Moselkabinett. Well below 10% alcohol and then so much action in the glass is just great. And of course they can also mature. Only these two, they no longer mature, they are both gone now.