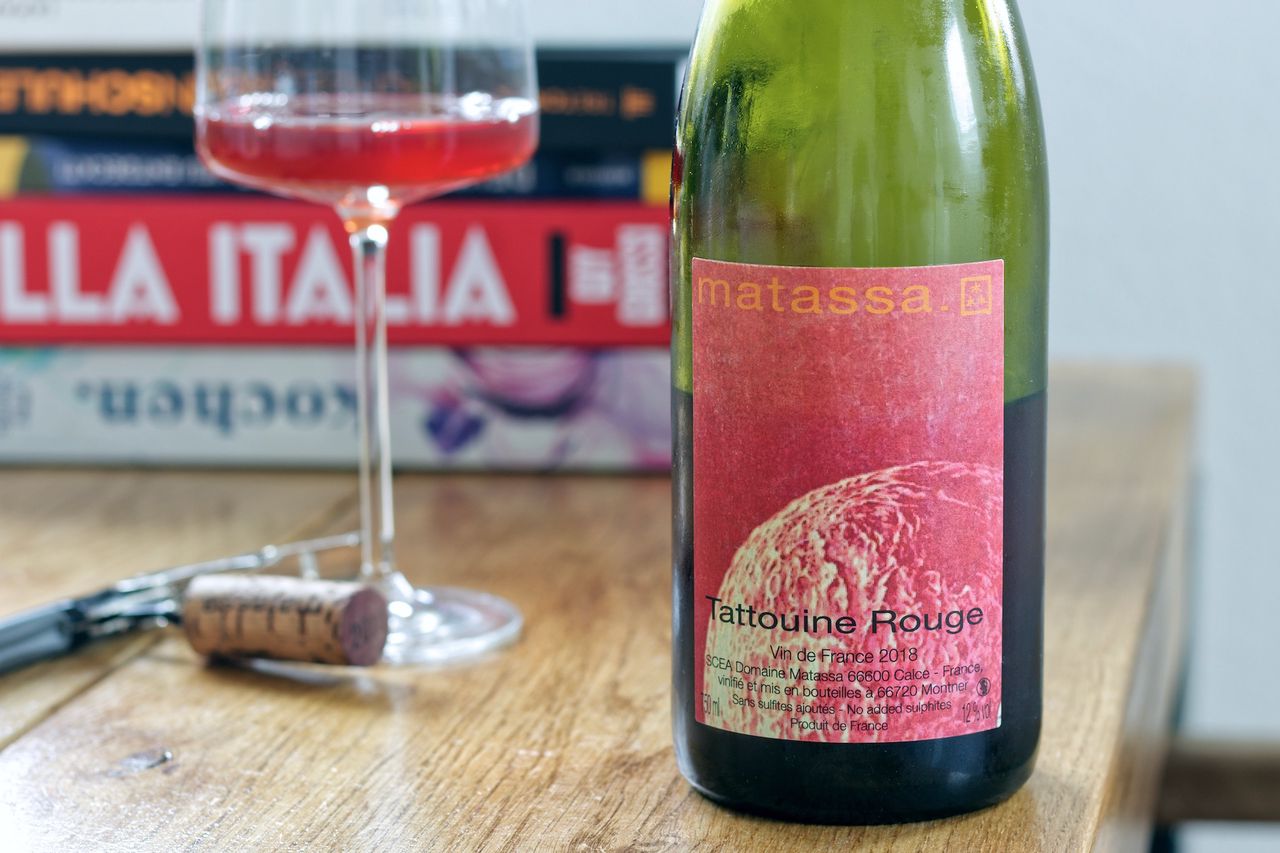 I’ve been catching up on a series about a certain former bounty hunter. And even though a source found in the vastness of the internet says that this wine is not named after a certain planet where exactly this former bounty hunter freed himself from a Sarlacc again, at least the connection is very obvious. I mean, there’s a red planet on the label. And I like this connection also a bit more than the name origin of the single vineyard in which the vines stand on red slate. It is what it is. Somehow it’s also pretty funny that the second bottle of Matassa on the blog again is also a blend of white and red grapes, so we’re sort of drinking Schiller again (Thats the name around here for blends of red and white). In this case, Grenache Gris and Grenache Noir are in roughly equal proportions in the wine. And if you look at the color in the picture, you could already start arguing about whether red wine should even be used as a buzzword here, or whether this isn’t actually more of a rosé. But it is what it is again. The key data of winery and winemaking we have already dealt with last time, so today we come directly to the wine.

In the absence of previous research and the rather impulsive opening of the wine, after it has almost jumped me in the cellar and was then left standing around a few hours, the first sip arrives somewhere just before room temperature in the glass. This does not necessarily mean a big detraction from the whole thing, but should be mentioned, because it drinks a fair bit nicer when cool. So don’t be me and think about the optimal drinking temperature beforehand. For us, however, this means having a sip and then refrigerator. The wine is wild. There is dirty strawberry, a veritable stinker, herbs and cherry. On the tongue, however, it seems super clear. The beautiful fruit in tandem with a very soft tannin is really good. There’s also an amazing amount of smoke on the nose. Honestly, this is more than just fine even warm and with air, the fruit is already getting nicer and the herbs more intense. I’ve mentioned several times that I have at least a difficult past with Schiller. This one rocks though.

Cold, the wine then becomes quite a saufwein. This has a bit of a blend of cherry candy and herbs now. The tannin is even softer, the smoke completely gone again. The structure makes the wine exciting and the acidity is super fresh. Boba may be fett, this wine is not (okay, this doesn’t work as well in english as I hope that it does in german and I probably should have spared you). And it’s not an ultra complex wine either. But it doesn’t have to be.

A day later, it remains that way. The wine now reminds me a bit of Bionade (a german limonade). Lots of cherry, some rose perhaps. I liked the tannin on the first evening minimally better. But I often feel that way about rather light Naturals. Since the wine should rarely survive the first evening anyway, that’s okay. The freshness that Tom Lubbe gets into his wines is impressive every time.

I’m sure it is tasty at Mos Eisley Cantina, too. In this case: Bring the same bottle again.