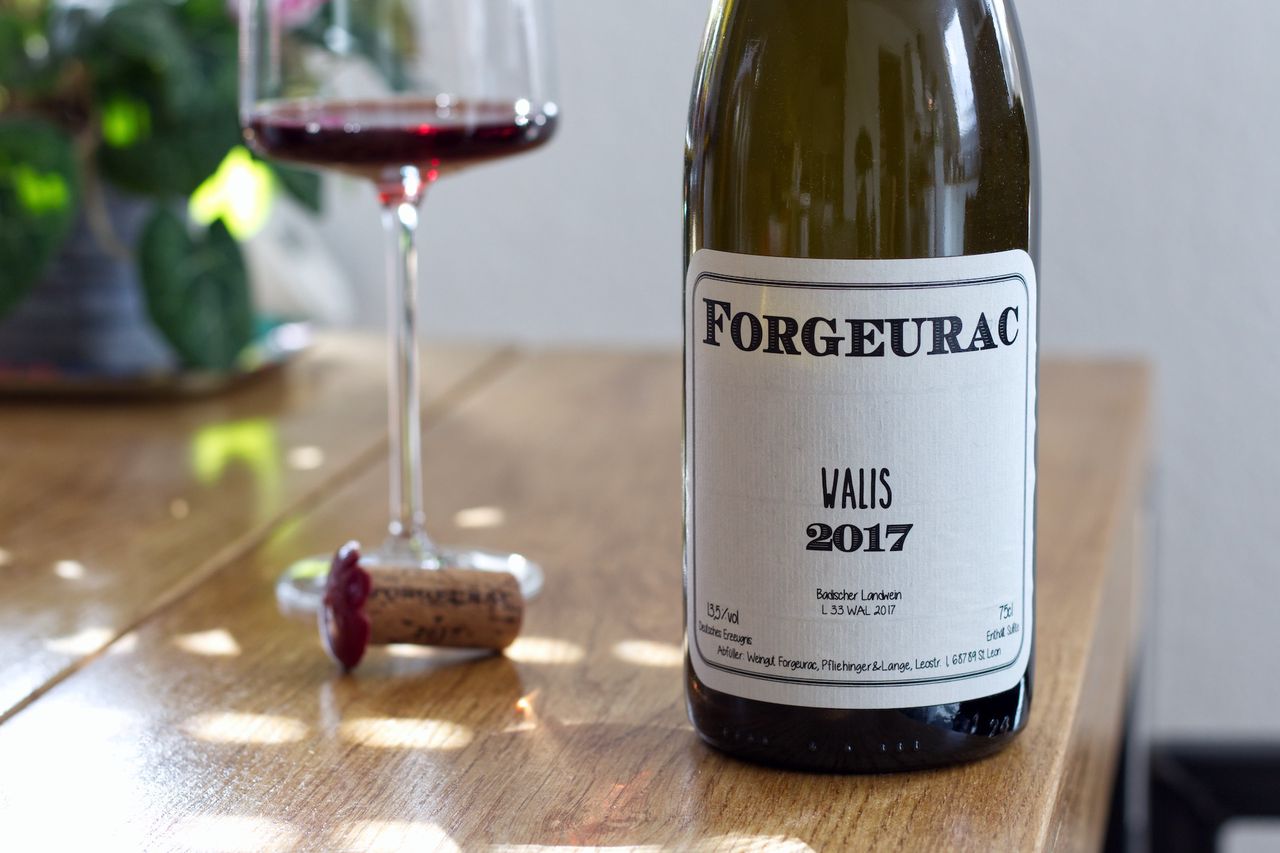 Actually, the idea was after four weeks of Baden wines to drink something else again. In the cellar, however, the bottle here then appealed to me so much that I simply add another week of Baden to the schedule. If you take two steps back and squint your eyes a bit, you might not even notice on the label that it’s a different wine at all compared to last week. Yes, the corners are round here and the font is a bit fancier and the box consists of three strokes instead of two, but as I said, take a few steps back and squint your eyes a bit and you’ll think you’re seeing double. And all without having had a single sip. But this time it is red. Pinot Noir to be exact. The wine is called Walis, the winery Forgeurac and it was harvested in 2017. The vineyard for the Walis is not in Switzerland, but in the very south of Baden near Efringen-Kirchen. The vines stand there on Jurassic limestone. The grapes are fermented spontaneously, the wine is aged in used wood and bottled without filtering or fining with only minimal sulfur. And finally, one of the toughest wax seals I’ve had in a long time goes on top. Normally I twist the corkscrew through and just pull and the wax then crumbles off more or less brittle. Not this time. This capsule almost cost me my waiter’s knife. Not the best start.

But now to the wine. I like the slightly dirty red. On the nose, the wine starts off rather quietly. There’s lilac, some cherry and wood and vanilla. On the tongue, the acidity adds decent freshness. At first, the wine is completely carried by it. When it then recedes ripe but slightly mushy berries and quite a velvety tannin remain. Plums and spices are now added to the aroma. The wine is elegant and fine, but at the same time already now becomes more intense on the nose with air.

Later in the evening, the cherry fruit comes to the fore again. In addition, the lilac and ethereal notes that remind a bit of menthol. Somehow you get the feeling that the more air the wine gets, the more youthful and fresh it appears.

A day later, there is clearly more structure already on the nose. There is more forest floor and more herbs. In addition, some balsamic vinegar and of course the fruit. The Walis has become really intense. On the tongue, it’s juicier now. And it’s clearly more powerful here as well, even though neither acidity nor tannin have noticeably increased. So I’m not at all sure where it gets its freshly gained strength from. However, it helps the drinking flow and there was already a lot going on in the tongue on the first evening. I like that, especially that it remains so unagitated. The wine is simultaneously quiet and yet intense, calm and yet completely engaging. Above all, it is quite beautiful.