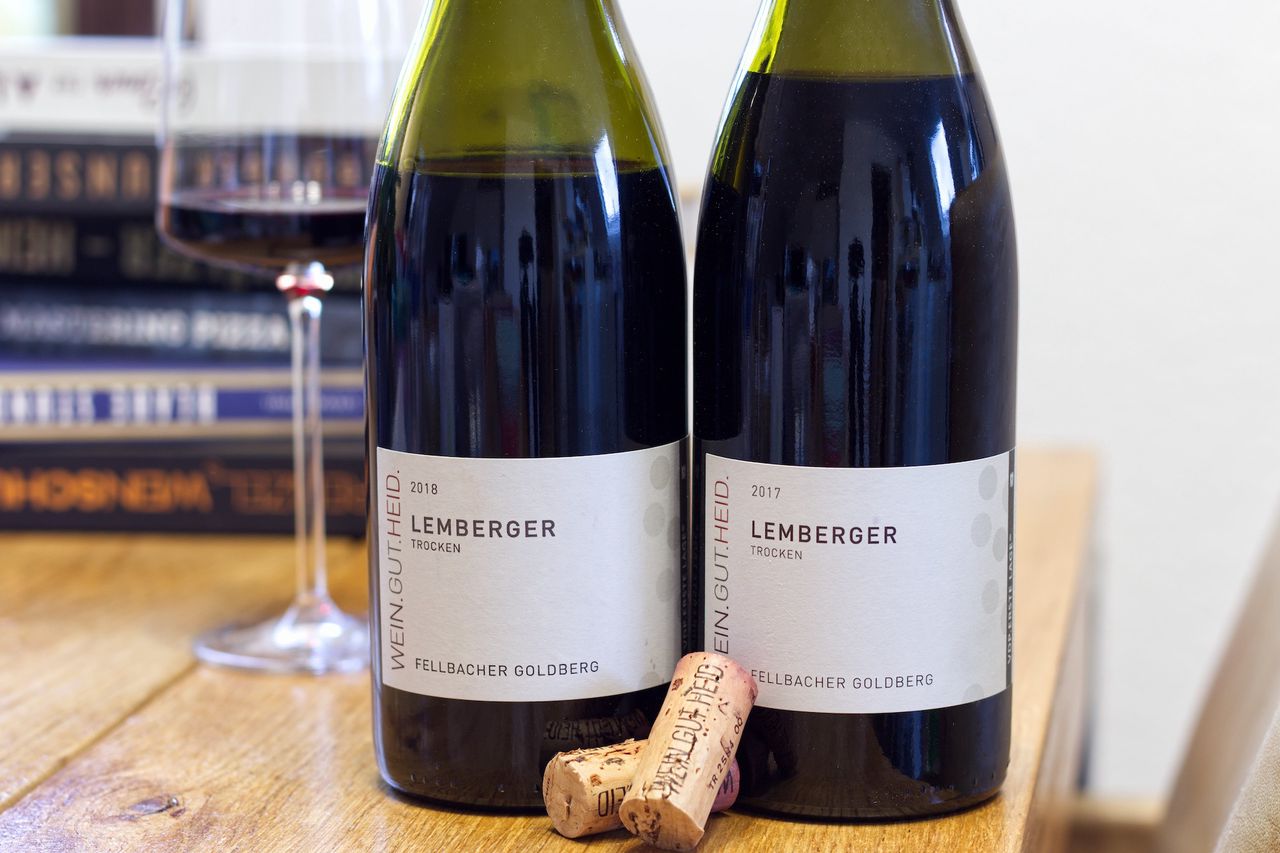 Lemberger from here is always somehow balm for the soul and balm for the soul can actually not be enough at the moment. Markus Heid is the tenth generation to make wine. He converted his parents’ mixed farm into a pure winery and switched to organic viticulture as early as 2007 and joined the VDP in 2013. On the approximately 11 hectares of the winery, red grape varieties dominate the cultivated area. The Fellbacher Goldberg, from which the grapes of the two Lembergers come today, is classified as a Erste Lage. However, at the time of writing this article, anyone who wants to find out more about the site on the winery’s homepage is still greeted by a filler text. The site is spread over several, non-contiguous vineyards in the south of Fellbach near Stuttgart. The Lemberger are from 2017 and 2018 and were aged in used barrique. Before we get to the wines, however, I have to have a quick gripe about the corks. The cork of the 2018 was partly hollow and could be squeezed and also the 2017 did not make a stable impression. But now to the wines.

The 2017 smells of some ripe cherry, prunes, some smoke and leather and a touch of pencil right after opening. On the tongue, enough acidity gives plenty of freshness and juiciness and the fruit arrives here as well. We like this.

With a day of air, the fruit seems a bit sweeter on the nose and becomes a bit more subdued. There continues to be the leather and spice and now also comes ethereal notes reminiscent of eucalyptus. The tannin to the juiciness harmonizes perfectly. This is a perfect food companion to the combination of Lemberger and Swabian Zwiebelrostbraten, a steak with onions, that almost always works.

The 2018 seems more berry-like in fruit. Overall, it’s a bit sweeter on the nose and also a bit darker. There’s plum crumble and cinnamon. There also is less acidity on the tongue. It seems fuller, but also has more and rougher tannin. One definitely notices the warmer 2018 a bit in direct comparison.

And even a day later, it is the more intense, riper and warmer wine on the nose. It’s not fat or jammy, not at all, but if one glass is 2017 and the other is 2018, there’s definitely a noticeable difference. Overnight, the tannin has softened a bit as well. Of course, it can’t make up for the extra year of time the 2017 had. But that’s not a bad thing, because the more intense fruit is actually a great match for the more in tannin.

Both wines hold up quite easily in a third evening and I do not like to have to decide between the two. For well under 15 euros both bottles give more than enough value. The development over the three evenings shows that it could also mature in the cellar for some time. And if the cork were a screw cap, it could do so without having to hope that my sample here was an outlier. Because despite all the grumbling about the piece of bark in the bottle, we really like the rest of the contents.