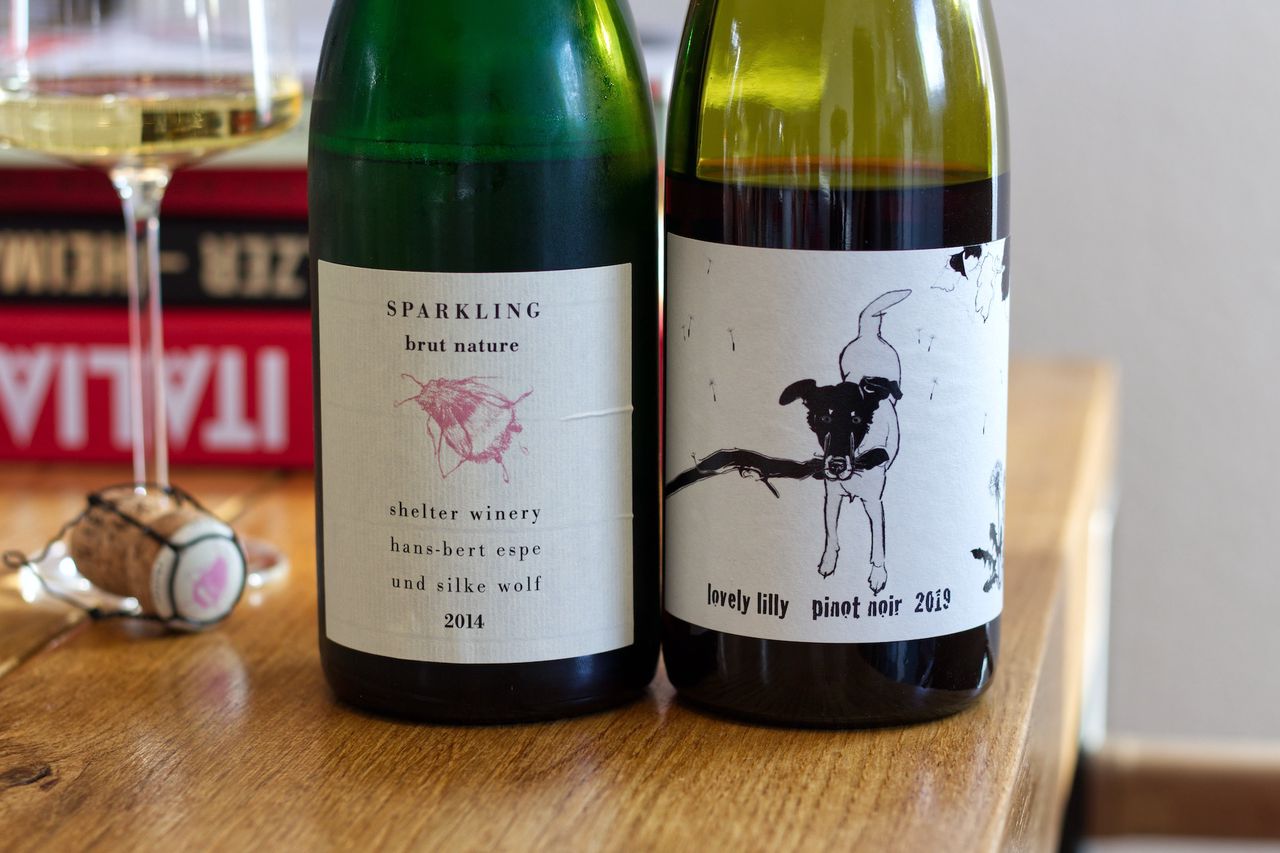 I wouldn’t say that we buy every bottle with a dog on the label. The content does still play a role that should not be neglected. But it would also not be right to conceal the purchase-promoting aspect of such a label, especially with the better half. And that is why Lovely Lilly is now on the table and not another Pinot Noir still wine from Hans-Bert Espe and Silke Wolf. There would however be plenty to choose from, since Pinot Noir makes up the lion’s share of the portfolio. So it is only logical that the sparkling wine, a Brut Nature 2014, was also made entirely from Pinot Noir. The two founded their winery in 2003 with vineyards in Malterdingen and Kenzingen, north of the Kaiserstuhl region, and after originally staying in a hangar at an old Canadian airport in Lahr, which influenced the name Shelter Winery, they are now at home in their own cellar. They farm the 5 or so acres virtually on their own except for harvest. The Lovely Lilly Pinot Noir is fermented in steel and then aged in large, used wood. For the Bubbles, the base wine lies in barrique and is then allowed to age on its lees for a long time in bottle before being disgorged without dosage.

The Lovely Lilly starts with relatively little fruit on the nose. There’s some meat juice and some spice. So right out of the gate, the wine seems rather earthy with blackberries and underbrush. On the tongue, it has a surprising amount of power. There’s a bit of black tea, cherry and structure. We like the tannin with a slight bite and the fresh acidity. This acidity then also becomes more lively with more air, and with it, the whole wine.

Even the next day, the fruit is not really offensive. There is cherry and a few berries. In addition, some smoke and further the earthy notes. Now and then something floral shows up in the nose in between. The tannin has softened and in total the wine is enormously harmonious tonight. For under 10 euros, this is a really great deal.

The smell of brioche baked with lots of butter clearly shows in the Brut Nature that it has been in contact with its yeast for a long time. In addition, there is yellow fruit, briefly even rather intensely reminiscent of multivitamin juice and canned fruit, but then harmoniously integrated again after a few moments in contact with air. In addition, there is citrus fruit. I would describe it as calm and in peace with itself. In the mouth, the sparkling wine has a great acidity that gives a lot of freshness and also the yellow fruit finds its way towards the tongue and stays there for now. We also really like it. And that’s without a dog on the label.