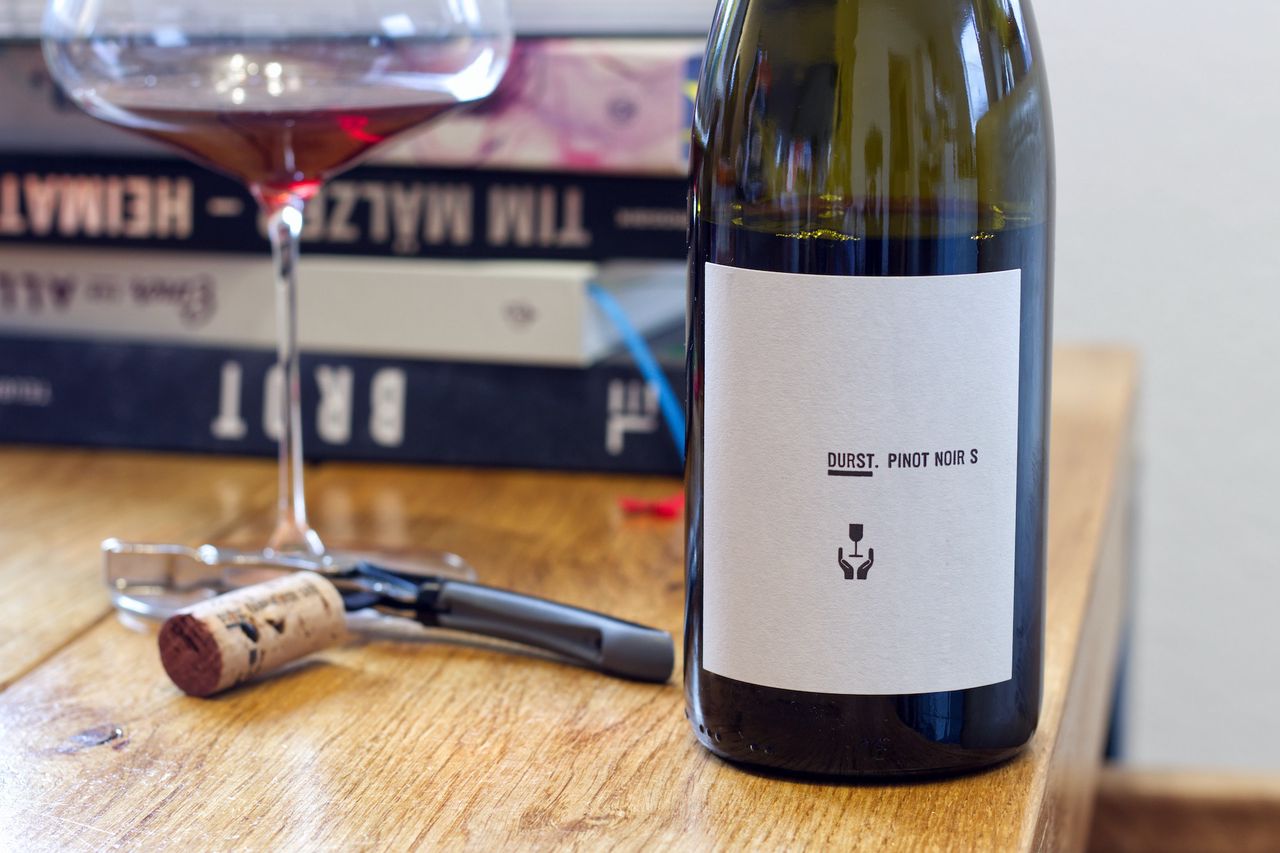 I spare you the various puns considering Durst and how it translates to thirst. But it’s been a while since we had wines from Andreas Durst in the glass on the blog and I thought that the Pinot Noir could actually be a nice start to the year. Also, with 2016 vintage, it fits nicely in line with Riesling from 2014 and Portugieser from 2015. The next one will have to be a 2017. But for now, let’s talk about the Pinot Noir S. Andreas Durst makes two different versions of his top-level Pinot Noir. Once with a little bit of added sulfur and once without added sulfur. The S reveals that we have the version with sulfur in the glass. Sulfur makes wine more stable and prevents unwanted microbial processes. That it is possible to bottle stable wine without added sulfur, provided that the grapes are suitable, is shown by the fact that this wine is also available without S and countless other wines do the same. The discussion, however, what adheres to the pure doctrine of natural wine, which depending on the discussant sometimes slides into the ideological, I find tedious. In the absence of a comparison bottle without the S, the question which is superior would remain speculation with exactly this wine now anyway. And who knows, perhaps there follows at some point a note on another vintage and then without the S.

Immediately after pulling the cork of this bottle, it greets one first with quite a lot of cherry. But this lasts only very briefly. Almost as if the wine was surprised by the opening, it quickly becomes gruff on the nose, unwieldy and almost a bit alcoholic. There’s some leather, tonka bean, smoke and it smells like you’re chewing on something woody. Exciting. On the tongue, it’s very similar. It starts off super fine, fresh and then becomes quite harsh especially out the back. The wine resists. Remedy should bring a large glass and time to breathe and a lot of swirling in just this glass give hope that this could indeed work. The fruit comes back, becomes more complex and the spice changes as well. This might be really good tomorrow.

The wine does feel much softer the next day. Fine, elegant and even a bit quieter than it was anyway. I find it pretty hard to pick out individual flavors. There is fruit and there is spice and something earthy is there too. Everything is balanced, nothing screams loudly here, but nothing has ever screamed loudly out of the glass with Durst wines anyway. The berry fruit on the mid-palate is gorgeous, and the mix of freshness and slightly damp forest floor is great too. There are herbs, something ethereal, lavender perhaps and balsamic vinegar notes. As I said, the wine is complex and full of subtlety. The harshness is down significantly and only at the very back of the tongue does it scratch a bit before it just lingers in the mouth for an outrageously long time.

It wasn’t that long ago that I fell in love with a German Spätburgunder and now it’s happening again. But I really don’t want to fight against that now either. It’s just too beautiful for that. If the wine is of any indication then 2022 will be fine.