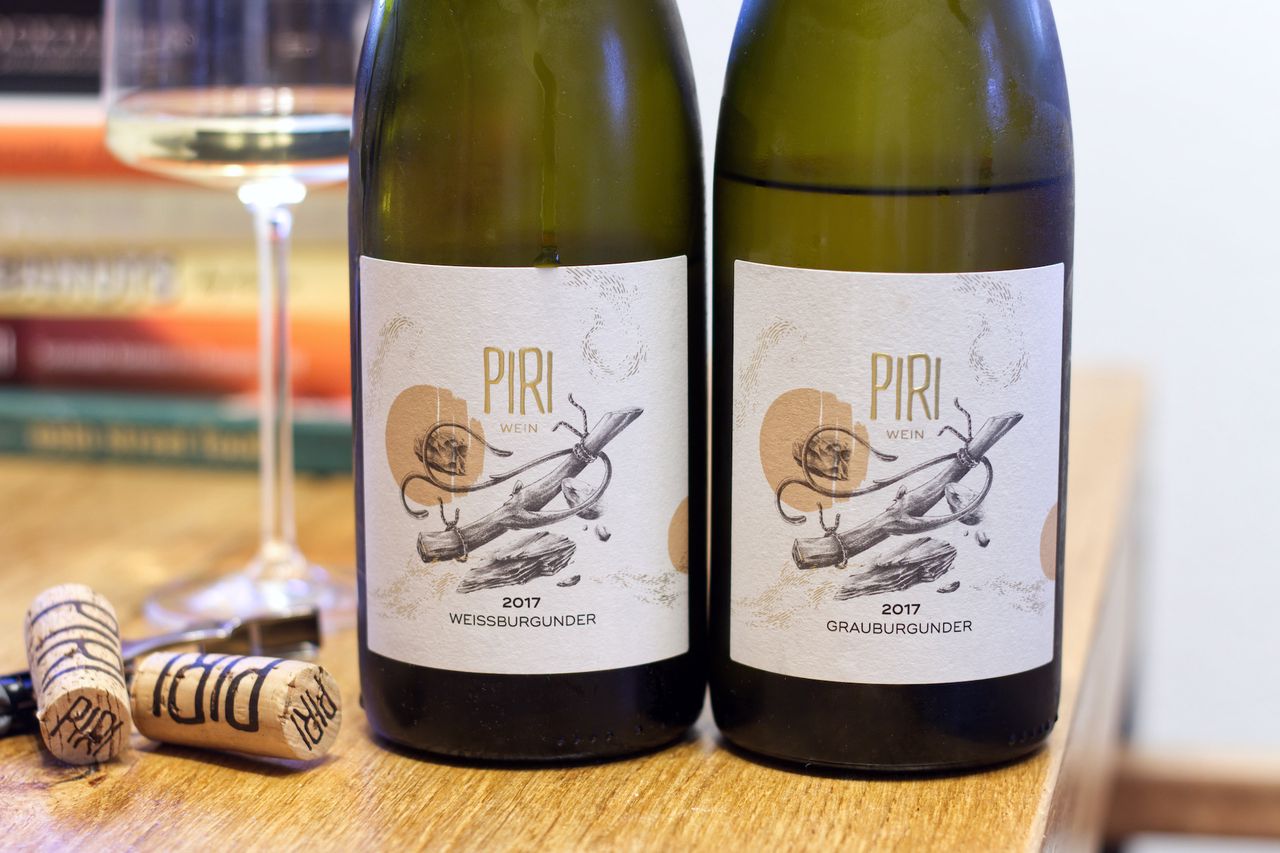 There it happened again. Wine in the shopping cart only because I liked the label. But it is a really nice label, right? The siblings Christine and Philipp Pieroth are ready as the next generation in their parents’ winery Weinheimer Hof and have launched two new wine lines. One is called PIRI Naturel and includes the more radical bottlings that are also still on the TODO list. But today we have two wines from the PIRI Wein line in the glass. The winery is located on the Nahe and has been in family hands since 1781. The PIRI Wein wines are also produced closely to nature. The cultivation in the vineyard is thoughtful, the work in the cellar as well. The grapes are fermented spontaneously and the wines get the time they need. You can see how much time this can be in the two wines in the glass. It says 2017 on the bottle, but it is the current vintage listed in the wine list on the homepage. Both wines are Terroir level bottlings of the middle of the PIRI line with estate wines below and single site wines on top. After fermentation, the wines were allowed to spend more than two years in used wooden barrels until they were bottled unfiltered.

It starts with the Weissburgunder. The wine does not really get going in the nose directly after opening. Some pome fruit perhaps and a few floral notes. More happens on the tongue. There is a lot of creaminess, which immediately makes it clear that the wine has been on the lees for a long time. That lingers forever and then there is structure after all with a touch of tannin. With air, the nose becomes fuller but not fruitier. There is a slight natural impact with apple peel. But the wine shines through the mouthfeel. The creaminess that lingers forever and the structure to it are really good.

It continues exactly the same way a day later. No sign of fatigue, the nose has become a bit more intense, now there are herbs, some ethereal notes and cedar mixed with a great freshness. The time in the wooden barrel has definitely paid off.

The Grauburgunder also doesn’t really want to come out of its shell in the first moments. What does come out clearly smells more like apple. Here, however, both the peel and the fresh fruit. Behind that, some wood and smoke. Just like its counterpart, it really shines on the tongue. Describing it, however, becomes a challenge. Just like the Weissburgunder, the wine has a good portion of creaminess packed into it due to the long aging. However, it feels quite different from the Weissburgunder. And since this happens completely in the mouthfeel and can not really be assigned to any flavors, it is difficult for me to put it into words. Let’s just say that it seems brighter, somehow more light on its feet. What’s easier to express is the wood and vanilla notes that come behind the creaminess. In addition, with air comes some exotic fruit in the direction of pineapple and also some herbs.

And this also continues with the Grauburgunder on the second evening. Here there are two real character wines for under 15 euros. If you want to try out what long storage on the lees does to a wine, then you are right here and at the same time you are quite far away from the often feared Grauburgunder and Weissburgunder conformity wines. I should buy much more often only by label. So far, that always works out pretty well.