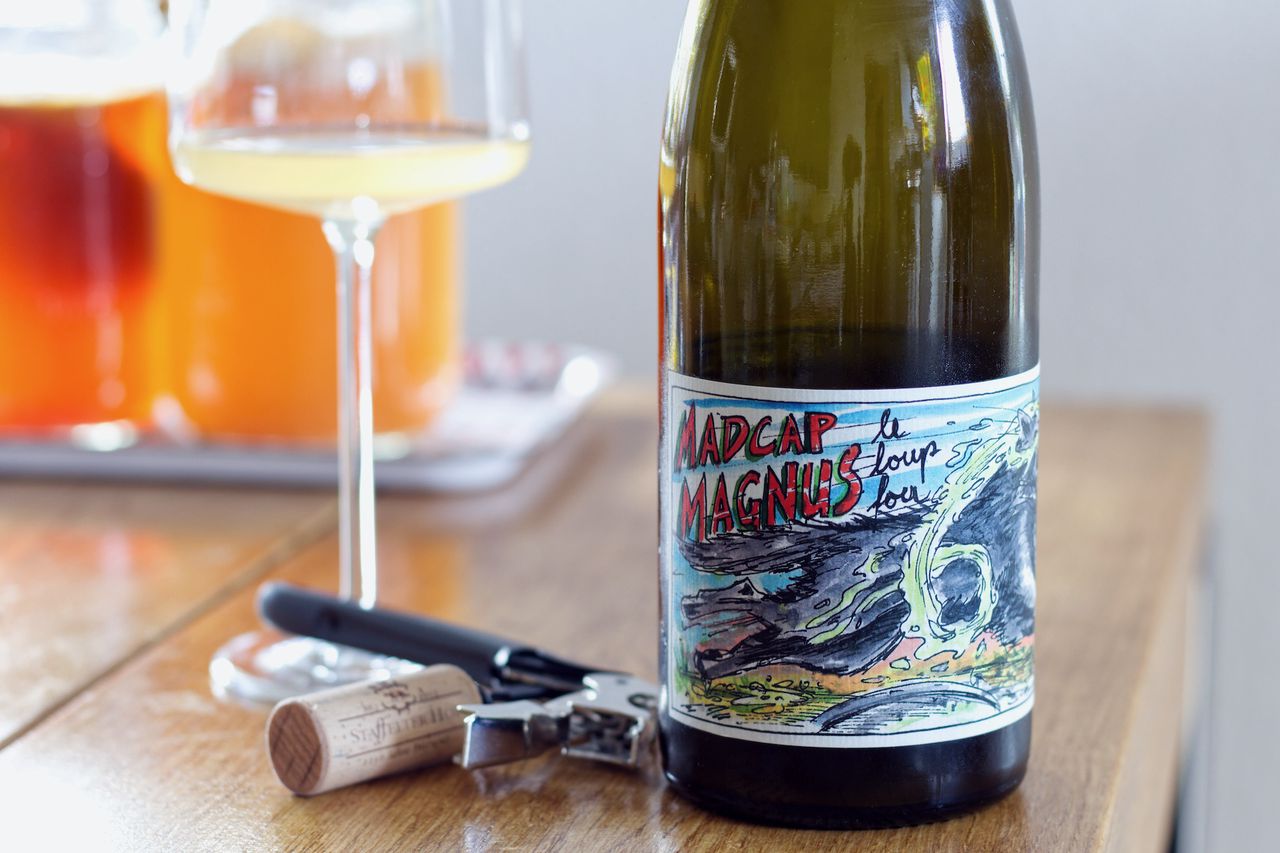 It would be once again time for anticipation of the weekend after Pentecost on the Mosel. Unfortunately, this year Mythos Mosel has had to be canceled again and we are left once again only to keep the memory alive through drinking Moselriesling. Already 2019 the station at Staffelter Hof has remained in the best memory. On the one hand because of the location itself and on the other hand, of course, because of the great wines and guest wineries, of which one has also already appeared here. Based on documents dating back to 862, Staffelter Hof is considered to be the oldest still existing business in Germany. This means that wine has been made here for over 1150 years, an unimaginably long time. Since 1805, the winery has been in the hands of the family of today’s seventh generation man in charge, Jan Matthias Klein, who has held the reins since 2005. What I find incredibly impressive is that despite the long tradition, so much is happening on and around the farm. In addition to classic Mosel wines, there is a complete line of natural wines from which the Madcap Magnus also comes. On top of that, there are wines from solidarity agriculture of Jan-Philipp Bleeke, there is steep slope rescue in the klitzekleine Ring, there is a whole line for wines from cooperations with small producers, there is gin and tastings with other ferments of the cellar master Yamile Abad, PiWis are planted and and and…. A wild mixture and proof that tradition never has to stand still.

The Madcap Magnus, named after the winery’s mascot, was the first natural of Staffelter Hof and thus a forerunner for the now quite extensive selection of natural wines from the winery. It consists entirely of Riesling from the estate’s best sites. It ferments completely after some maceration time and lies in the used wood on the lees for a long time to gain stability and structure. Nothing is added and nothing is taken away. This also means that the wine is bottled without the addition of sulfur. The grapes are grown organically and both in the vineyard and in the cellar this kind of winemaking means a lot of manual work.

The Riesling hides well, though. At least the first nose has nothing at all of typical Riesling. What I find exciting is that it also first has nothing of typical natural wine, because the often found slightly fermented apple peel is nowhere to be seen. The aroma feels cool, the fruit slightly exotic and overall still a bit restrained. It is difficult for me to classify the wine. It also feels cool on the tongue, first has a very fine creaminess and out the back neat structure. The spiciness is great, along with salty minerality, where the Riesling then shows what it pulls out of the steep slate slopes. Already in the first moments, the wine becomes more intense and more structured. This is going to be exciting.

The nose remains subtle throughout the evening. There is now passion fruit and some pineapple. However, it does not really nail down the aroma. The scent reminds us of the fruit somewhere in the subconscious, but it is not like other wines and quite difficult to put into words. There are now nuts, a bit of wood and a hint of tea leaves after brewing. There has also been a distinct evolution on the tongue. The Riesling seems more balanced, it has become more structured and softer at the same time, much more defined than immediately after opening. At the same time, however, it is never gruff or demanding, and I would even go as far as calling it Saufwein in its own way in this state. Which of course doesn’t do it justice either. What does it justice, however, is the impression it leaves. I don’t know if I’ve drunk Riesling like this before and this bottle is not the first Riesling Natural wine in my glass.

Overnight something creamy gets into the fruit, the way one imagines slightly squishy mirabelles perhaps. At least the general direction is right. Now there’s also a hint of fermented apple skin on the nose. The acidity on the tongue is really fun, the wine is fresh, drinks beautifully, has a great citrus note out back, minerality and fine tannin. More Riesling today than yesterday, but also vanilla flavored tea, kumquats and a bit of orangina in between. This is something you have to have drunk.

In addition to the wine, a bit of Staffelter Hof has also moved in more permanently with us. In the cover picture you can already see two vessels in the background in which Kombucha is fermenting. Kombucha is made by SCOBY (that’s the slightly disgusting looking slimy thing on top) and it was exactly this SCOBY that we got from a small remnant of Kombucha Chichamorada made from black corn by Yamile Abad. That in turn was part of a Staffelter Hof tasting package with wine and other ferments in April, and growing it on has worked surprisingly well. Beyond the classic kombucha made from tea, a full chapter is now opening up in one of my favorite cookbooks in the “exciting, yet only in parts suitable for re-cooking” category, the Noma Guide to Fermentation. A first experiment with apple juice instead of tea is in the picture. More will follow. 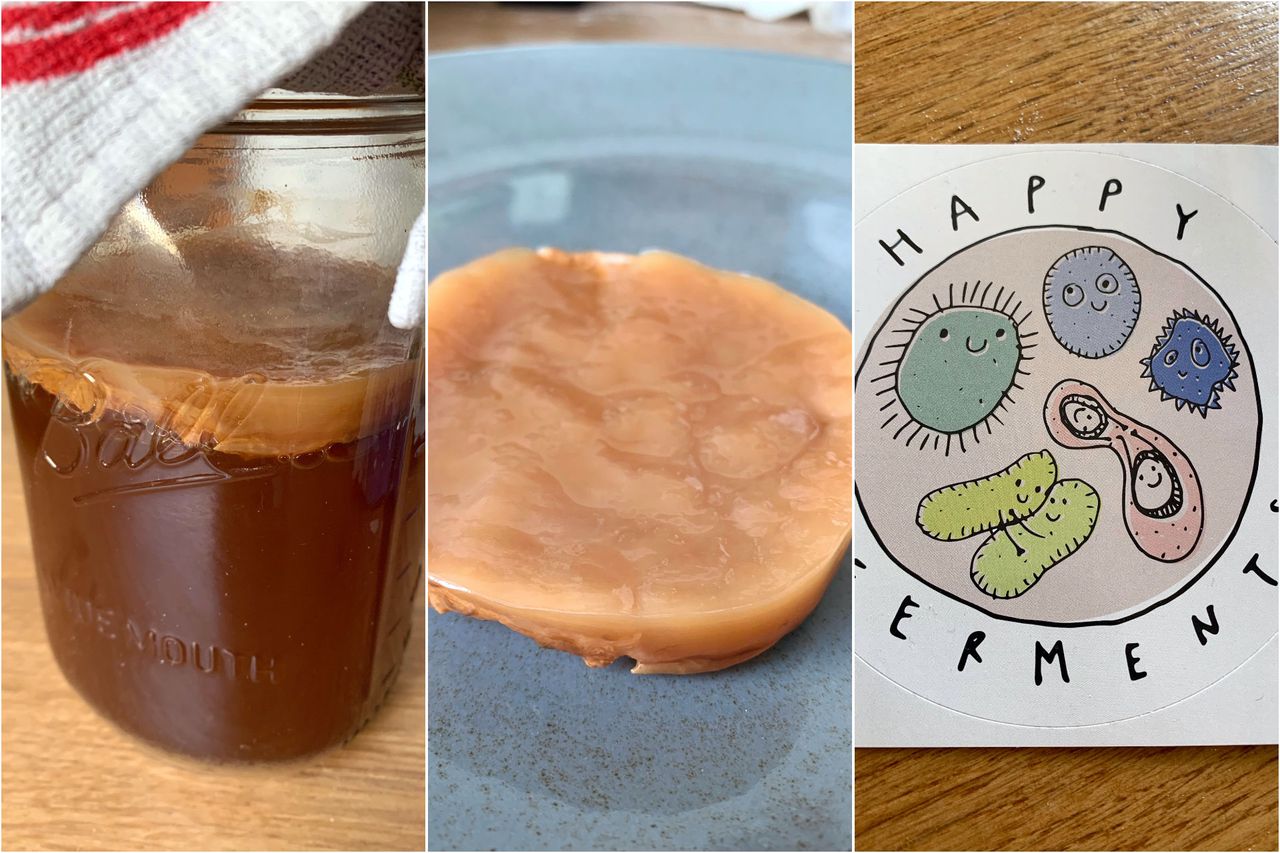