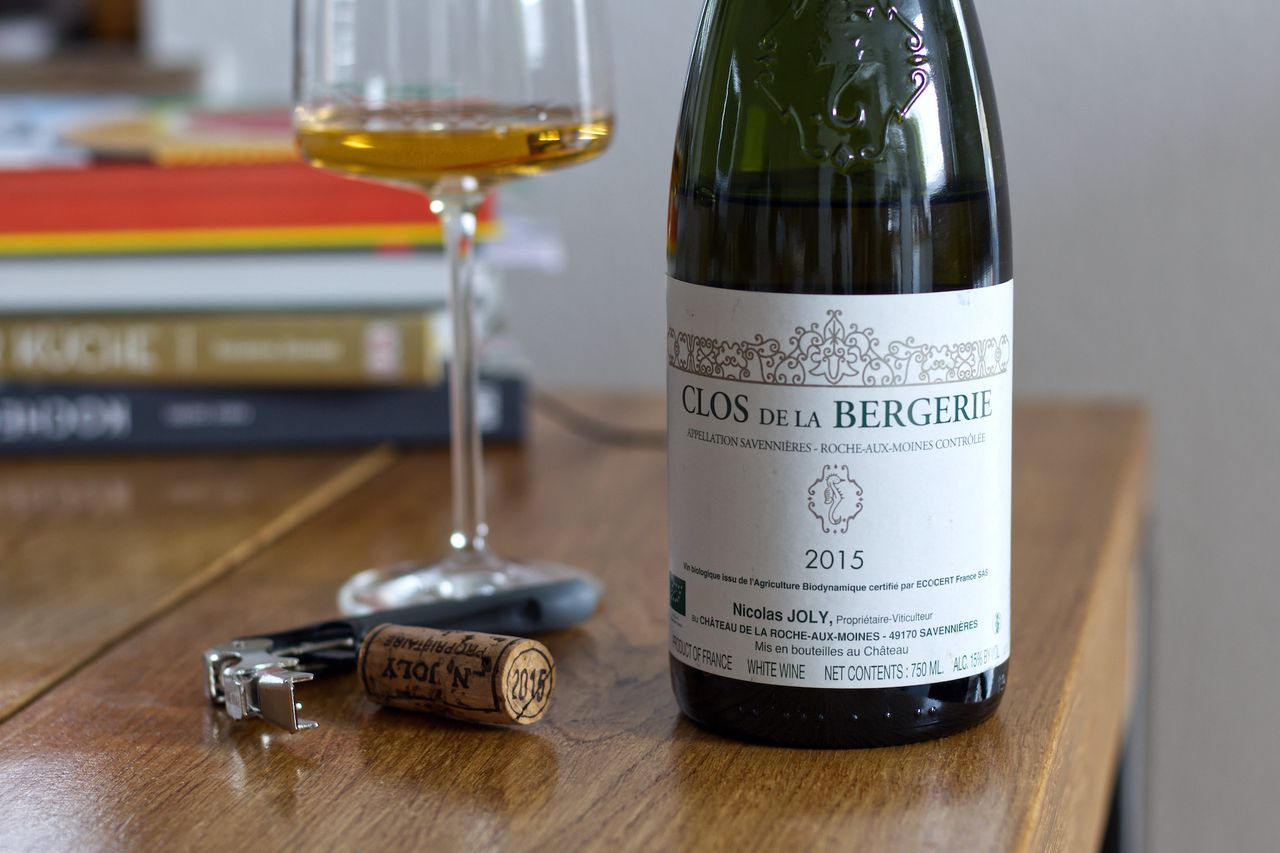 Compared to last week, we haven’t made much progress geographically. The Savennières Roche-Aux-Moines appellation is on the same section of the river, still on the Loire, and the grape variety has also remained the same. We have another Chenin Blanc in the glass. The Clos de la Bergerie from 2015 was made by Nicolas Joly. He is considered a pioneer of biodynamic viticulture. He began to work according to these guidelines as early as 1981 and later also wrote books about it and pursues these ideas radically. This means a lot of manual work, as little intervention as possible, reflecting the terroir, but also burying cow horns and stirring in the right direction. The winemaking of Joly is based on the idea that nature makes the wine and the winemaker supports it. The radicalism of this is not without controversy. I invite you to look into it yourself and come to your own conclusion. An interesting starting point for the discussion would be in any case what is told in the Blindflug podcast (if you speak german that is). However, the blog here is my free time and in this I want to drink wine today and not lead fundamental discussions. We can do that perhaps another time. Clos de la Bergerie is in the middle of the collection between the top wine Clos de la Coulée de Serrant and Les Vieux Clos. The grapes for the wine are harvested very late, very ripe and also include some botrytis. They are then fermented spontaneously and aged in used wood. The alcohol is stately at 15 percent. The back label warns: It needs air. Lots of air.

Nevertheless, we are naturally courageous and try the first sips directly after uncorking. Learning by drinking, or something like that. And what follows is immediately the admission that the bottle was right. The scent that comes out of the glass is so incredibly dense that you almost can not get through. There’s glue, honey, it feels dark yellow, herbaceous shrubby, but also quite impenetrable. Excitingly, it seems different on the tongue than I would have expected. Not as ripe and warm as the nose and the 15% alcohol is also well integrated immediately. Instead, it has spice and structure that is impenetrable in a different way despite a lively acidity. The structure is so stark that you feel like you’re chewing more than drinking. Very small sips, very slowly. Exciting on all accounts, but now it’s back to the cooler for the night.

It hasn’t really shed the density overnight. The glue is less, fruit continues to be more in the background. Added to that are leathery woody aromas. The complexity continues to impress, as does the structure on the palate. Almost salty chewy now. More air should bring a carafe in which part of the wine is now allowed to breathe. And with that, we actually move forward. The Chenin becomes more harmonious, more approachable. It takes on aromas of dried fruit, sherry, overripe stone fruit and the extreme structure on the palate is noticeably tamed by a light creaminess. A bit like fruit bread with caramel and salty stones. Beautiful, but also a bit exhausting.

This continues in exactly the same way on the third evening. The wine has softened a bit more, become a bit rounder and more open. At the same time, it manages to stay on the tongue even longer. It now has a nose reminiscent of white port, thyme, dried pears and quince. What it does on the tongue continues to be simply impressive. The structure, the density, the depth and the balance now found after a lot of air is definitely worth the wait. Sure, 15% is a lot, and yes, you have to chew more than you can drink at first, your attention is also fully engaged and at times it is even exhausting. But if you allow him that, then this wine is definitely a candidate for the “Need to drink at least once”-list.