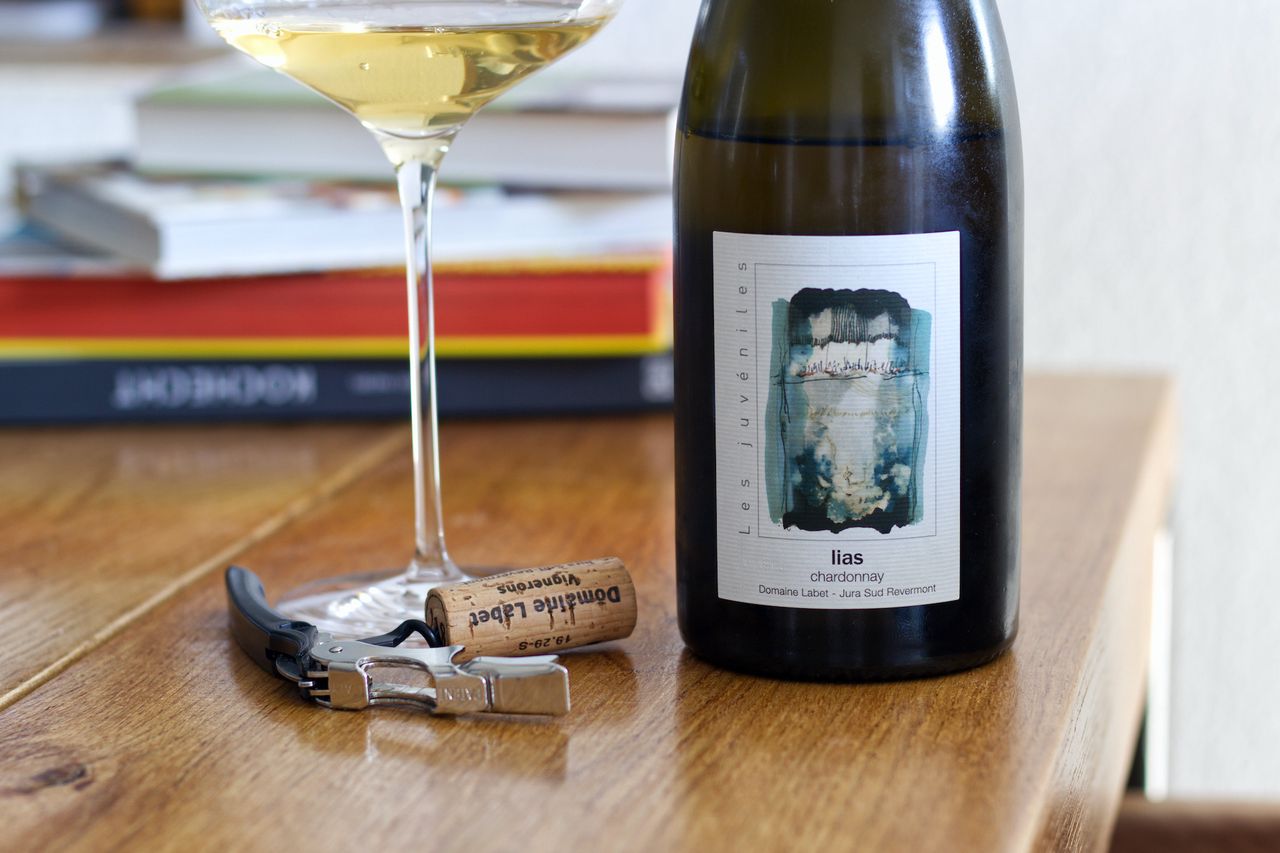 Because it was so nice the last two weeks we just stay in France for another week. At least in our glasses that is, away from the glasses, of course, we continue to sit cheerfully at home at a distance. This has, at least in this case, the advantage that I do not have to deal with the language barrier, which, because of the long forgotten basic French knowledge from as few years of French lessons as possible, would be guaranteed. So all I have to do is talk to the bottle and the better half, and the bottle doesn’t answer and the better half understands me. Most of the time, at least. Contrary to the last two weeks, however, we change the growing region and the grape variety. We drink from the Jura from the Domaine Labet the Chardonnay Lias from 2018. Yes, it is still young, but we allow three evenings time and that should help. The wine is filled again when some evaporates, which is called Ouillé and thus not primarily oxidative vinified. The domaine is run by the three siblings Julien, Romain and Charline and a wide range of wines are made to be able to highlight different plots and styles within the Jura as well as possible. It is hand-picked, the yield per hectare is extremely small, the grapes ferment spontaneously and in the case of the Lias they are then aged for 17 months in used 228 liter wooden barrels. Bottled at the end of February 2020, the wine has a sulfur content of less than 7mg per liter, virtually nothing. There is not that much quantity and at the same time quite a bit of hype around Domaine Labet wines, which makes buying ex dealer a real gamble and buying on the secondary market, if that is your intention, rather costly. We were lucky and were able to purchase a few bottles without secondary market and were now really curious if hype and bottle content correlate.

The first nose is a bit Natural, but at the same time super clear and cool. Smells quite like the typical apple peel but rather freshly peeled and only very slightly tarnished. In addition, there is a fine spiciness. In the mouth right from the first sip extremely powerful, very spicy, structured and also with the clarity that the nose already had. The acidity is super, fresh, juicy and already quite prominent. Fruit is there just none at all, only mouthfeel and at the front of the lips and also quite far back on the tongue the wine tastes salty. There is quite a bit happening on the back third of the tongue in total. After the first sip, the smell also changes a lot, no more apple skin, now rather sweet woody herbal and somehow it now also reminds of lemonade with a hint of wood behind it. The wine is super clear but at the same time it has so much depth that you don’t even know where to start and where to continue.

The herbal notes intensify overnight. The aroma gets even deeper and the spectacle that the Chardonnay fires off on the tongue is something it has retained. That intense spiciness and saltiness are great. But best of all is the combination of the desire for the next sip and the complexity. I already briefly thought on the first evening that it would be easy to empty the bottle now. That does not happen to me normally with wines where so much happens in terms of aroma and complexity. The acidity has become more fruity, now reminiscent of freshly squeezed lemon juice and this brings so much pull and freshness that the 14% ABV is not noticeable at all.

To all this, after another night in the fridge, comes a touch of creaminess. Both on the nose with a very subtle buttery note and in the mouthfeel. The saltiness has grown more and more over the three evenings and what started on the lips is now almost mouth-filling. And then comes the acidity, pulls on the cheeks, the spit runs and rinses down the salt and then lingers herbaceous spicy. The fruit has become even more pronounced, appearing bright yellow and fresh. It all adds up to a pretty great experience overall, and I can now absolutely understand why it’s so darn hard to get your hands on a bottle. I guess I’ll keep searching.