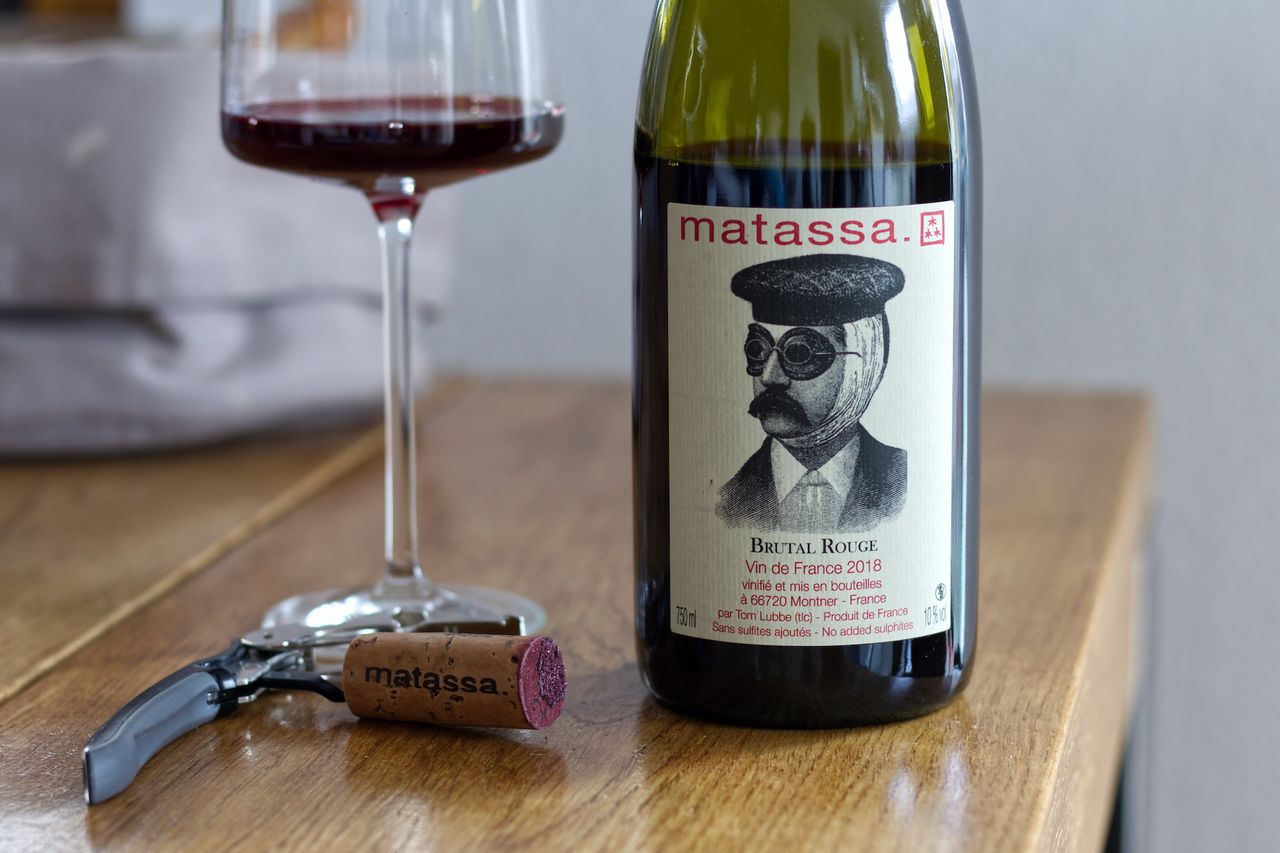 Quite far in the south of France we landed this time around, more precisely in Roussillon in Montner. This is where the Domaine Matassa is located. It is also pretty much where Domaine de l’Horizon presses its wines and the style of wine is comparable between them as well. The winemaker of Matassa, Tom Lubbe, was born in New Zealand, grew up in South Africa and finally landed in the south of France to make wine after an internship at Domaine Gauby, also located in Roussillon. Since the winery was founded 2002, it has expanded to about 20 hectares of vineyards, which are farmed entirely organically. The Brutal, which we have in the glasses this time, is a cuvée of red and white grapes and contains about 60% Syrah and 40% Muscat à Petits Grains, known in Germany as yellow Muskateller. Mixing red and white grapes is rather rare in Germany. Here in the area it is called Schiller, is rather pink and my memories of it are partly bad and partly blurred. Let’s leave this comparison aside for now. The Brutal has no added sulphur and is with just over 10% alcohol, especially considering that it comes from the south of France and then also from 2018, quite light on the chest. And it also satisfies the label drinker. I mean, look at the picture, how can you not buy this.

In the glass, the wine starts off with quite a lot of berry. A bit of tannin structure on the nose and maybe even a bit more white wine than red wine on the nose. Then cherries and rosehip tea develop. In the mouth, however, more tannic than first suspected and with more resistance. There’s a bit of apple and again the cold red fruit tea that lingers forever on the tongue mixed with a few green leaves. The freshness is tremendous, as is its drinkability. Really impressive to pull something like this out of the vineyard so far in the south.

Overnight it gets earthier, there’s a bit of forest floor to it and some spice that wasn’t there that first night. The fruit is still there, of course, but now stands alongside the other flavors and not so much in front of them. I was actually a little afraid the evening before that the wine would fall apart over the night with its little alcohol and the way the tannin felt on the tongue. But not only did that not happen, there was some real forward development in return.

The Brutal gets spicier and spicier, deeper in fruit, and it gets so much more substance without sacrificing lightness. It is this balance of freshness, lightness and depth that makes the wine. The forest floor disappears again, leaving behind the cherry, blueberries, some marzipan and clove. Meanwhile, the tannin feels almost silky on the tongue and the juicy easy drinking qualities are great. Really fun wine, don’t think too much, just drink it. A bottle is still waiting in the cellar and what can I say, I’m looking forward mightily to pull the cork.