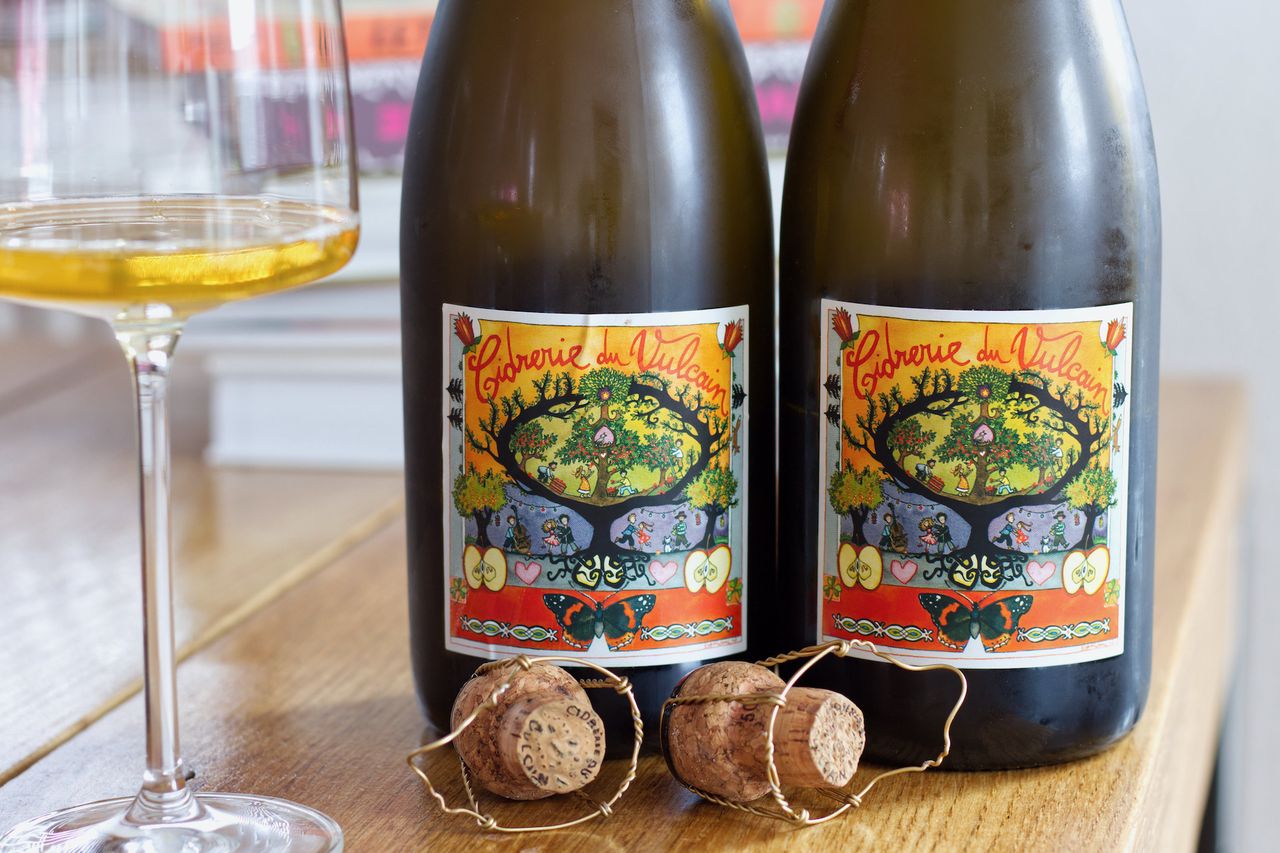 I already mentioned it in January: orchard meadows are part of the landscape here and therefore it is obvious that products from old apple or pear varieties have a special fascination for me. The fruit for the cider we are tasting this time does not come from the foothills of the Swabian Alb, however, but from Switzerland. Jacques Perritaz has been making sparkling wine from these old varieties in the Swiss Jura around Fribourg since 2006. The fruits all come from organic farming, everything is fermented spontaneously and sulphur is only added at bottling, and even then the sulphur content is minimal. The fruit comes from less than 200 apple trees, so the quantities are rather small. The aim is to bring the characteristics of the varieties to the bottle. We drink two of them: a Cidre de Fer, which is made extra-dry from the Bohnapfel (iron apple) variety, and a Transparente, demi-sec, from different apple varieties, but mainly Transparente de Croncels. Cider also has the charming characteristic that, with around 5% alcohol, it can be drunk in large sips without fear of the next morning.

We start with the Transparente. It has a slight stink, almost seems a bit metallic for a moment. But in fact it only took another moment and that disappears again. Nevertheless, the nose is rather reserved and quiet. In the mouth, on the other hand, the fruit is fully there, clear and apple-like, plus some tannin and structure. What remains on the back of the tongue actually feels exactly as if one had just swallowed a piece of apple. The cider has citrus notes and mandarin and is a bit tart. The stink doesn’t want to disappear all evening and so taste and smell don’t quite want to go together, but the tension in between is somehow also what makes the Transparente beautiful.

The du Fer, on the other hand, smells really like an apple. Of course, that somehow makes sense for a cider. But here, it is so clean, so clear, that it creates the aroma in your head that you think of when the advertising wants to sell you a shiny red, plank-polished apple. Everything smells much brighter, and the taste is too. There’s also a bit of yeast pastry. It is more apple-juicy, clearer, and somehow also more dashing than the Transparent. This is certainly also due to the fact that it is clearly drier. The better half opposite the table grumbles softly that it is rather boring in comparison. But we can agree that this clarity and this little touch of minerality are really great.

Overnight, we parked a small residue in the bottles under champagne stoppers in the fridge. Unfortunately, this didn’t help the bubbles at all, but it didn’t affect the taste. Nevertheless, I wouldn’t recommend it, as the bubbles play a not insignificant part in the greatness of these two bottles. So just empty them in one evening. And that’s what you should do in any case if you get your hands on a bottle of this.