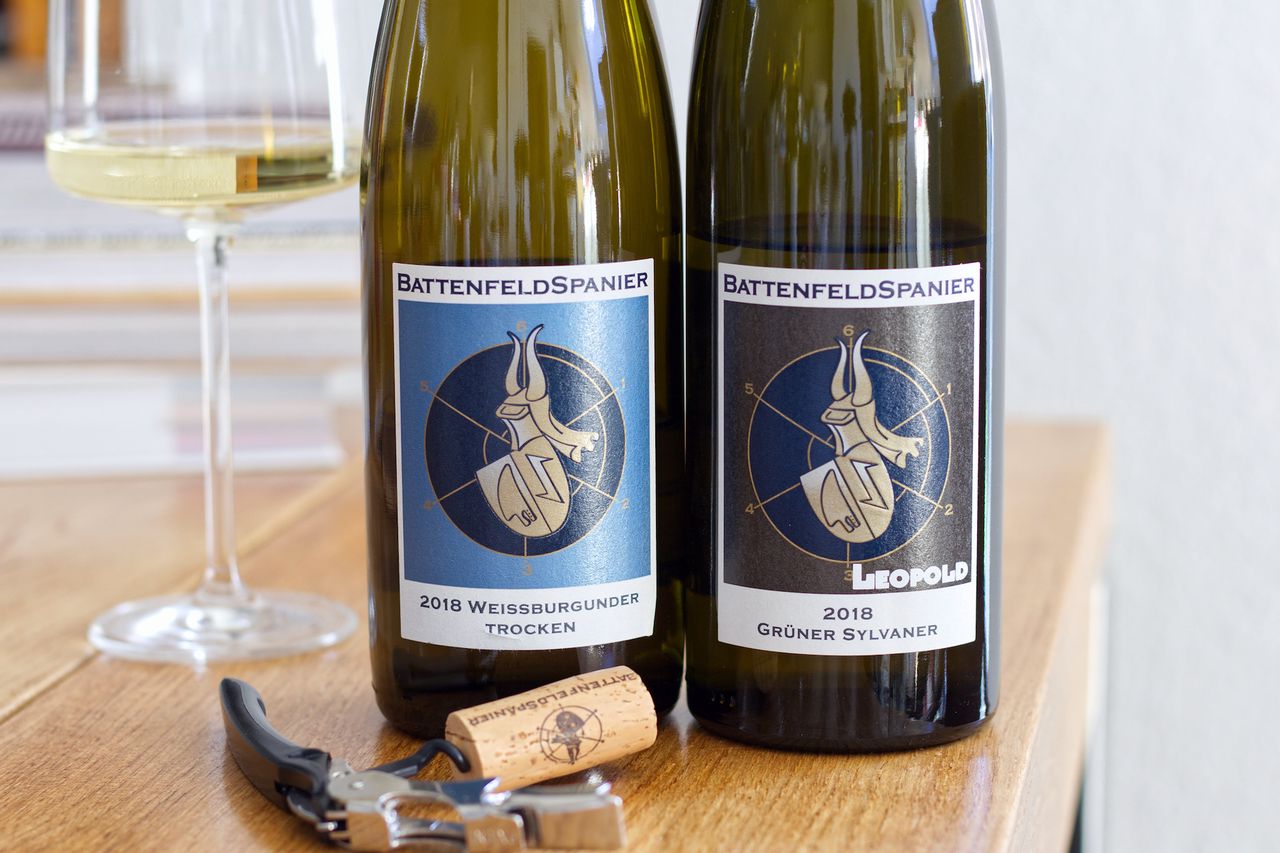 In the Wonnegau, located in the very south of Rheinhessen, Hans-Oliver Spanier has been making wine in an ecological way since 1991. Together with his wife Carolin Spanier-Gillot, he is responsible in the cellar for the wines of Battenfeld-Spanier and also those of Kühling-Gillot. Although Riesling makes up a large part of the assortment and especially the great wines of both wineries, this time we are deliberately drinking something different. Also since Silvaner in particular used to be the most important grape variety in Rheinhessen and is still grown a lot today. We start at the bottom of the quality pyramid and have a Weissburgunder Gutswein and a Grüner Sylvaner Leopold, Hohen-Sülzen Ortswein, from Battenfeld-Spanier in our glasses. The Weissburgunder is mainly vinified in steel, the Silvaner in wooden barrels. The grapes for both wines were harvested in 2018.

Let’s start with the Weissburgunder. It is almost a bit meager in the glass. A lot of freshness, some mango and pear are also present in the nose. On the tongue it is crisp, mineral structure, some citrus bitters and what immediately stands out is the density and firmness. Much more than I would have expected from a Gutswein Weissburgunder. Almost a bit unusual.

Even after a night in the fridge, the fruit doesn’t jump out at you. Still, it opens up a bit, there’s more pear and now floral notes. Nice and tight, with plenty of draw and a fine fruit. On the one hand uncomplicated, easy-drinking Saufwein and yet serious. A few big sips and the glass is empty. This is definitely a candidate to bring with you to a party. Most people will like it, but I myself also like to drink it. I assume that in the summer on the balcony it is even better than it is now.

The green Sylvaner Leopold, named after a son of the winemaking couple, is much more intense. On the nose, there is a lot of structurally rich pome fruit, a few herbs and in between, the wine smells quite like a natural. But then again it really doesn’t. On the tongue, it’s a stunner in any case. Enormously creamy and yet fresh in the acidity. The combination is great and it gets fuller and fuller and lingers forever. The nose also becomes more complex with air and time. Yet the creaminess on the tongue is so charming that you want to keep taking sips. In addition, a bit of apple core, some tannin and the acidity.

Relatively little happens overnight. A bit of mirabelle on the nose is added. But otherwise it remains true to itself. The creaminess, the herbal spice, the mouthfeel, all still there. Everything still great. It seems more mature than the Weissburgunder, is more complex and also has significantly more length. Not only Franconia can do Silvaner. One understands here why Silvaner from Rheinhessen was once so important and hopes a little bit that it will be like that again.