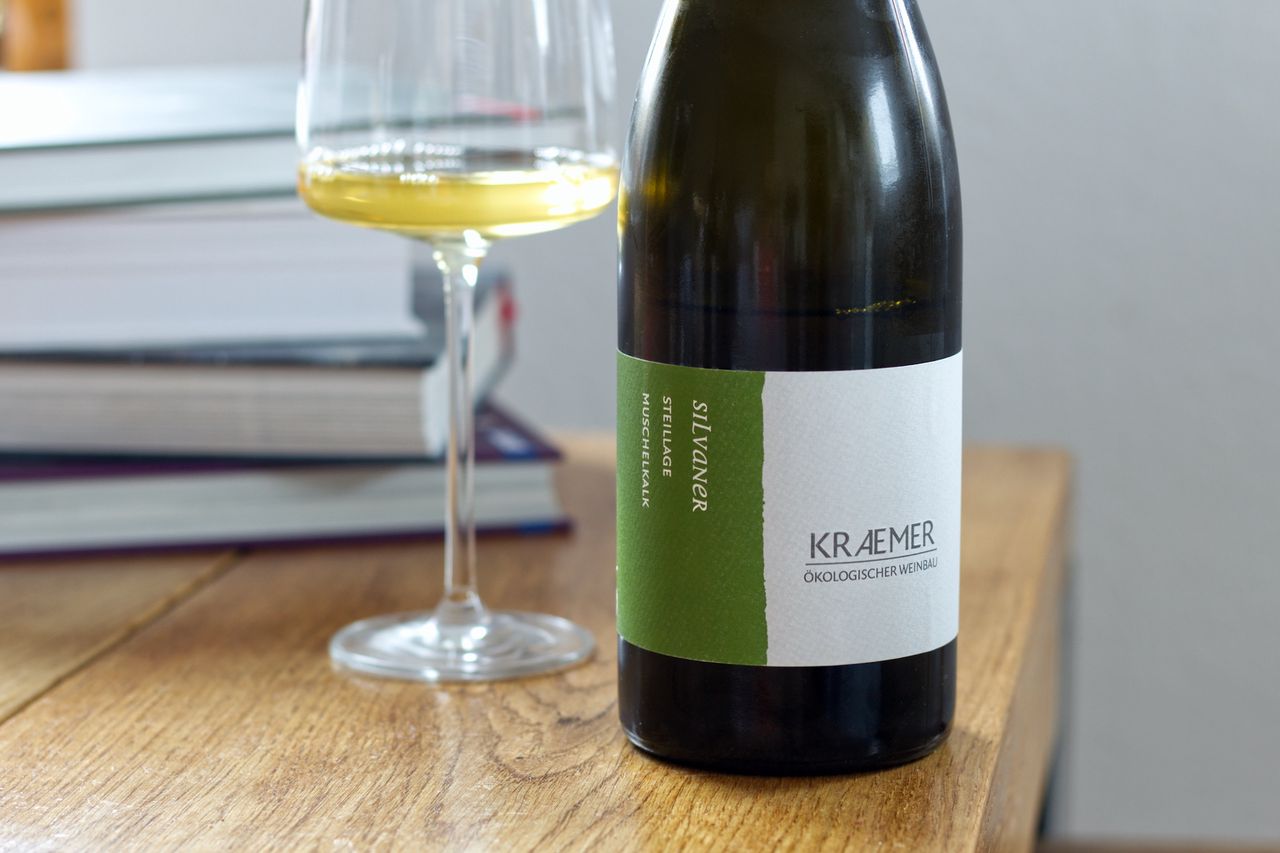 The village of Auernhofen is not the first thing that comes to mind when you think of Franconian viticulture. Nevertheless, we have already had a wine from there in the glass and this is the case again today. We felt like Silvaner and also a bit like Natural. That’s why this time we’re drinking a Silvaner from Stephan Krämer’s Steillage Muschelkalk from 2016. The Krämers’ farm is not a pure winegrowing operation. Rather, viticulture on about 4 hectares is a small part next to the 70 hectares of other agriculture. They work organically on the farm and in the vineyard, too, of course. The wine is partly fermented spontaneously with stems and then allowed to mature on full lees for over a year. It is not filtered, fined or sulphurised. You can see this immediately in the wine’s cloudiness.

It has a slight stink after it has been opened. You can hardly smell any fruit, it smells more like lactic fermentation and fruit peel. I can’t really say what the wine tastes like right after opening, except that I take another sip and another sip and still sit in front of the glass, perplexed. There is no fruit in the taste either, there is spice, a bit of acidity and minerality. There’s a little bit of bitterness at the back. My better half says that it tastes like biting into an unripe gooseberry. I don’t do that, so I can’t judge. The fact that there are no more ripe gooseberries on the bush bothers me however, but that has nothing to do with the wine. Despite the difficulty of assigning a taste, this is a lot of fun. Juicy and fascinating.

It stays that way the next day, too. The night of air could not harm the wine and it continues to pose riddles. Cool, juicy, wild and unusual. Almost even more purist today. Towards the end of the second evening, it becomes more fruity and somewhat reminiscent of lemonade. By its standards, it is now almost accessible.

Eager to see what would happen, it was allowed to breathe for another day. It becomes even more limey, citrus, grapefruit on the back of the tongue. But it always keeps the structure, the wildness and the resistance from the tannin. One of the more exciting wines this year and also one of the more demanding wines. You can’t just drink it on the side. But that would somehow not do it justice anyway. I suspect that the Silvaner would have had many years ahead of it in the cellar and it is just starting to open up. If the development over the days here is an indicator, then it will definitely become a bit more charming.