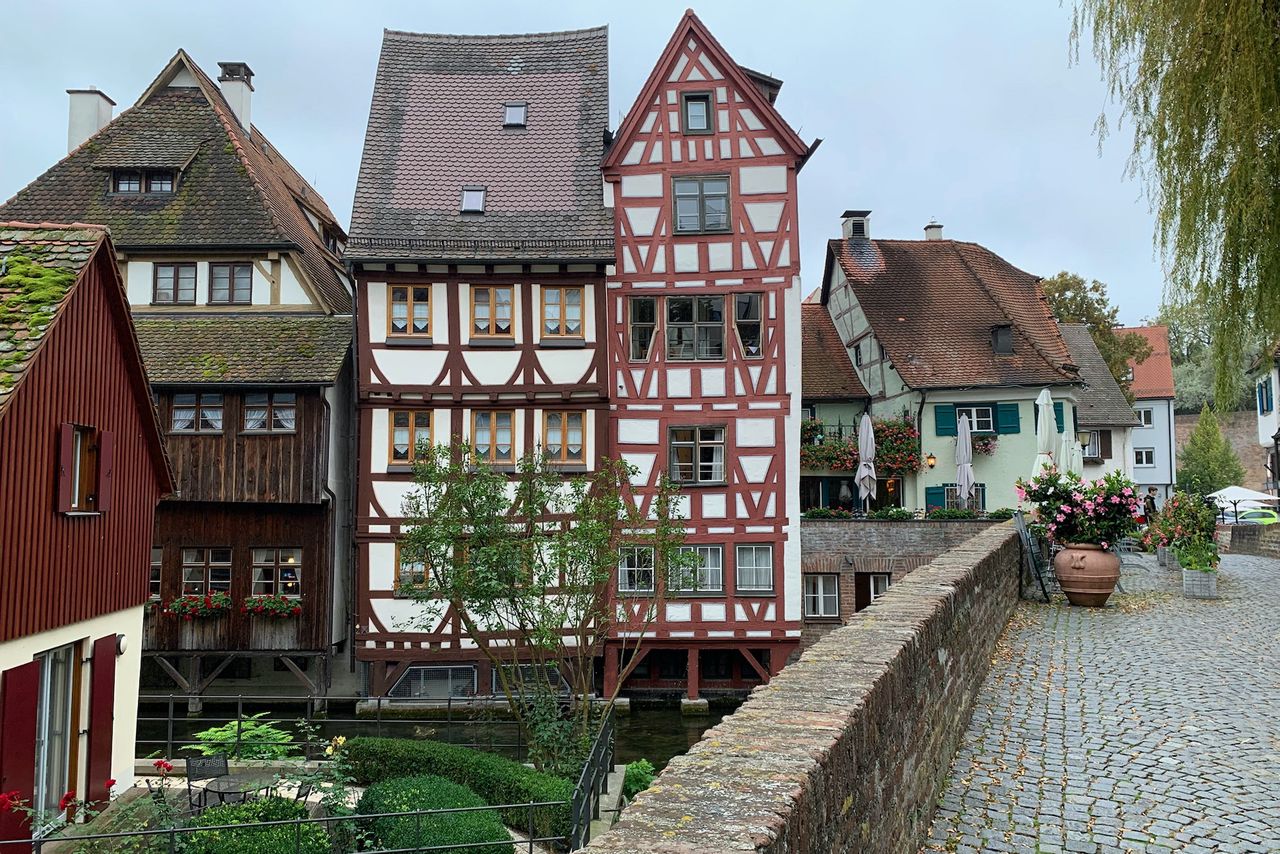 We very much wanted to have some vacation this year. Not too far away to minimize the time spent in the train, and still be culinary exciting without being one of the current inner-German holiday hotspots like Lake Constance. The choice fell on Ulm, because we had wanted to visit the Bi:Braud for some time now anyway. The journey actually worked out as planned, as there were so few people on the train at 2 o’clock in the afternoon that there was enough distance between you and the people who obviously are not able to cover their mouths and noses in a mask. In the S-Bahn we were even alone in the compartment. Perfect. Even better was that the weather was so good that we could almost always sit outside or when inside there was enough space to have distance between us and the other guests.

After arriving somewhat after noon and checking in at the hotel, we went more or less directly to the Freiheit Vinothek. In the spirit of no beer before four o’clock, 16:05 was the ideal time for a bottle of Stilleben by Charles Dufour. Bone dry, slightly oxidised apple skin, some brioche and a great, crumbly fruit with a fine spice. The small hunger in between was fought with braised beef, pumpkin and carrots, and salad with roast beef and goat’s cheese. That was the time when we put ourselves completely in the hands of the staff and only had part in the wine selection by nodding approval after the first sip. The notes suffered from this, but we had fun. So we drank a Testalonga Stay Brave Chenin Blanc from South Africa and a Malbec Puro from Dieter Meier from Argentina. We continued with a 7Fuentes from Suertes del Marques from Spain, made from Listan Negro and Castanella Negra, two autochthonous grape varieties, and with a wonderful little stinker and great cool aroma. Along that a De Fermo L.A. made from Chardonnay and Pecorino. This was in no way inferior to the red. Afterwards still from the same house a Launegild Chardonnay. Very cool in the aroma, very fresh and blindly not recognized as Chardonnay. The red alongside that was the Berhyll from Albrecht Schwegler from Württemberg. Dessert and evening conclusion combined was then a Chateau Nairac Barsac from 2005. Perfect. The little things to eat, the bottle list to choose from, the assortment in itself and above all the possibility to delegate the decision on what to drink was a very pleasant experience.

A stroll across the market, through the Fischerviertel and then along the Donau to Friedrichsau is perfect for getting any residual alcohol out of your system. The city centre also has a lot to offer away from the big shopping street. So much that we will definitely come back again. As already mentioned in the beginning, one of the reasons why we chose Ulm for these three days was not the city itself but the evening programme. And after all the walking around (15 kilometres, the mobile phone says) that’s more than deserved anyway. We had made a reservation at Bi:Braud and let ourselves in for the full 5 courses plus wine accompaniment.

We started with bread from the Ulmer Zuckerbäcker, an avocado dip, a curry dip, sea salt and good olive oil. Accompanied by a sip of Qvinterra Grauburgunder 2019 from Kühling-Gillot. A good start to the evening. Continue with the first real course of the menu: A wonderfully cooked pumpkin split with wonderfully creamy puree, goat’s cream cheese, flamed figs and a soy sauce based varnish. Lots of umami and earthy creaminess, loosened up by the cream cheese and aromatic herbs. Accompanied by a Ruppertsberger Riesling from Bassermann-Jordan, which was a good match with minerality and fresh acidity. With the next course, the highlight of the evening was on the table for me. Dumplings filled with super tender, intensely tasting oxtail, accompanied by diced mushrooms and pickled celery in an aromatic mushroom stock. Served with an Exceptional Harvest from Ximénez-Spínola, a semi-dry white wine made from sherry grapes. The combination of the slightly sour but crunchy celery, the oxtail melting on the tongue, the umami bomb mushroom stock and the wine was incredibly good. Chapeau both to the kitchen and the choice of wine. And while we’re at it, let’s not forget the service, the explanations about the food, the wines, the pairings and everything else. 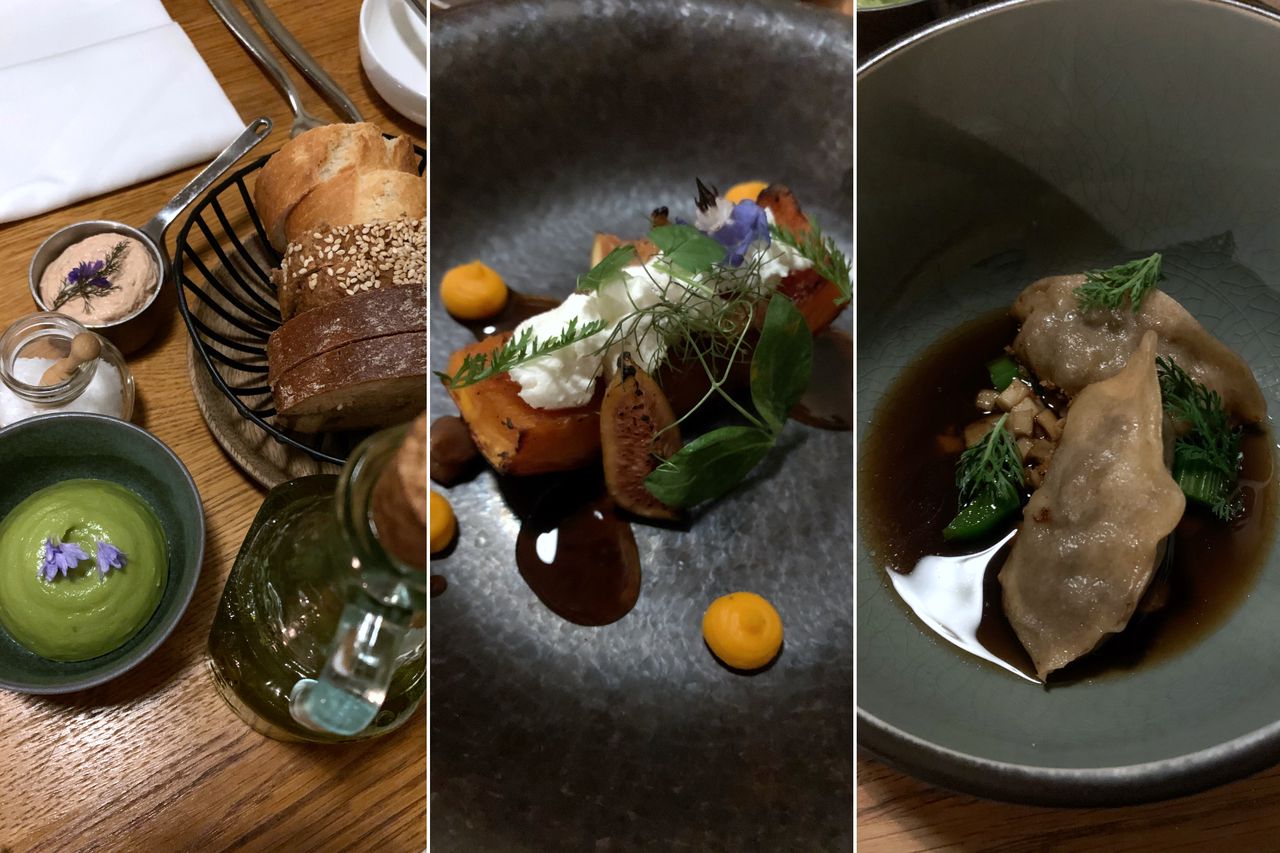 I almost feel a little sorry for the arctic char fried with perfectly crispy skin in combination with bacon, pears, pea puree and beans, which followed the oxtail. Actually, it was on a par with the oxtail and just as spectacular. The wine selection, a Chablis from the Domain de l’Enclos, a buttery, yellow-fruity pleasure, was also a great fit. It was so good that I will try the combination of pear, bacon and char myself. I blame it all on the taste from of the day and I am sure that on other days this course is ahead. The main course consisted of tender braised beef in an aromatic jus with fried mushrooms and an intensely roasted carrot and mashed potatoes. Great cooking, but not quite as impressive as the two previous courses. The wine was a mature 2008 St. Laurent. The finale was a real treat again. Grated carrots, plucked cake, sour cream, white chocolate, sea buckthorn and hazelnuts. Frozen, fruity, salty, sweet, crunchy, soft, sour, everything there. All accompanied by a Sauvingon Blanc Kabinett from Oliver Zeter. A worthy finish. 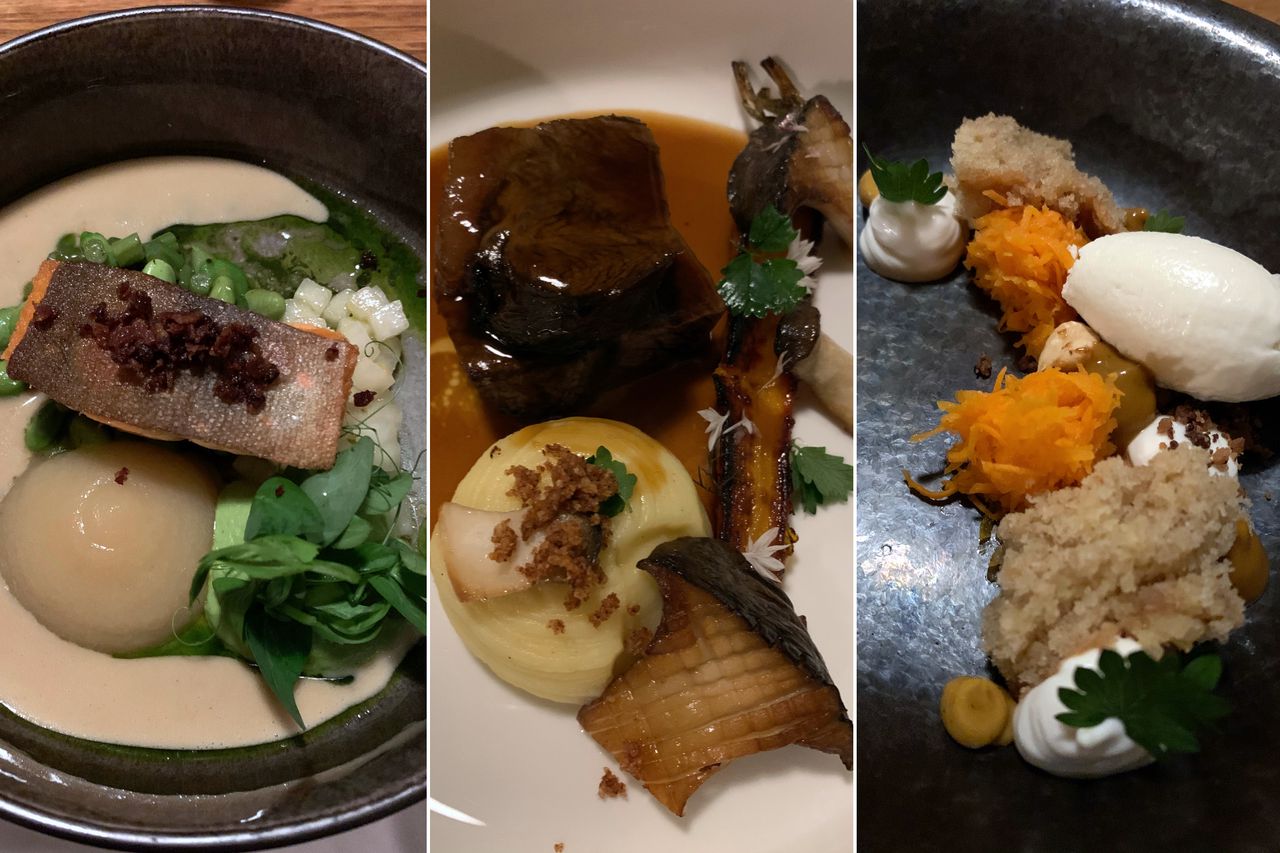 But we have not yet reached the end of our journey. The better half does not eat meat and so the main course and oxtail were replaced by meat-free alternatives. Instead of the dumplings, the team served burrata with pieces of tomato in an intensive, clear tomato broth. Crunch was also in the food, but what it was exactly got lost in my enthusiasm for the dumplings. Paired with a very light rosé, but unfortunately I also missed completely to note down the winery or the exact wine. The better half was very happy though. Both with the meatless alternative and with the wine pairing. The main course was swapped with the char, which was then served without bacon on the plate, and as a third course there were dumplings filled with spinach and mushrooms in a creamy parmesan and white wine sauce. This was accompanied by a fresh Pinot Gris from Ellermann-Spiegel in the Palatinate. 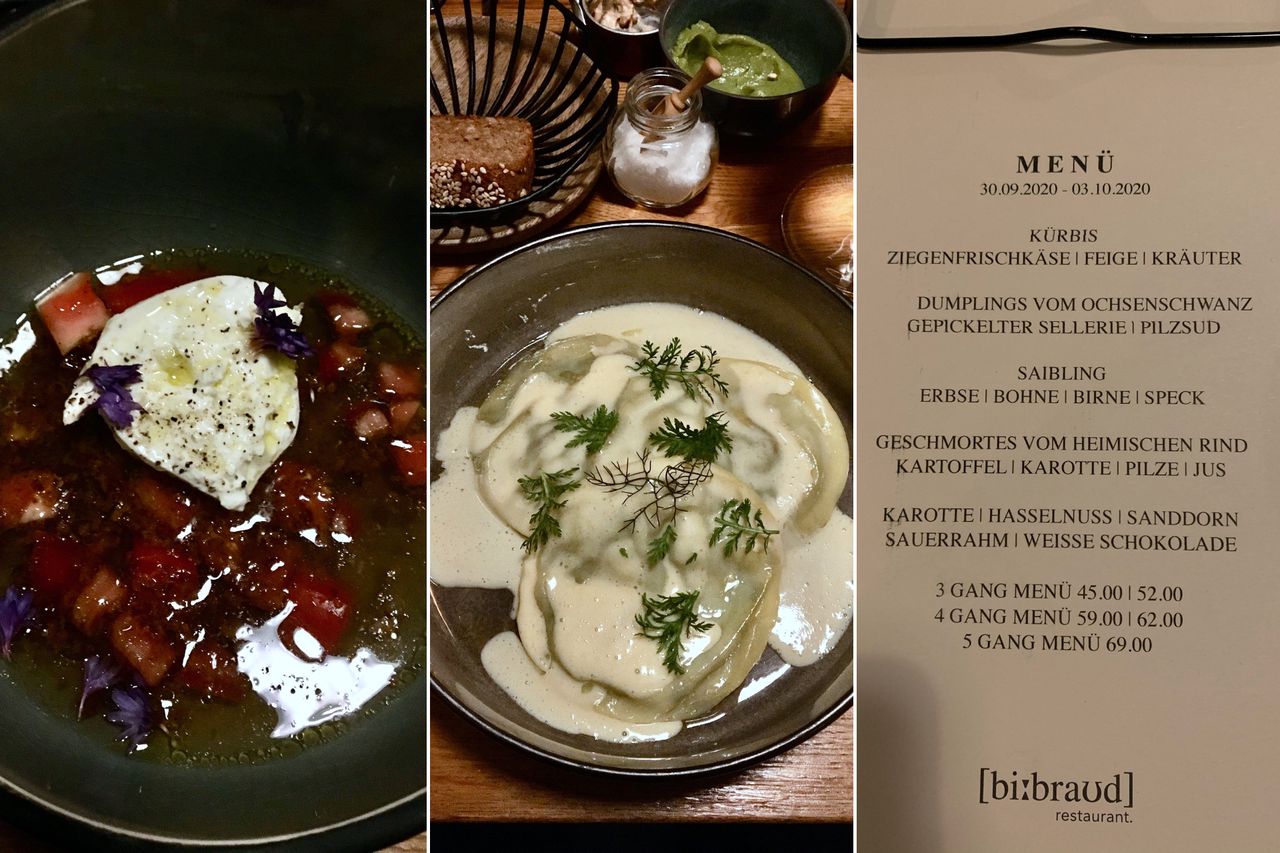 After such a menu, you can fall happily into your bed and it doesn’t bother you at all that on the day of departure, more rain than sun has fallen over Ulm. We will revisit for sure. 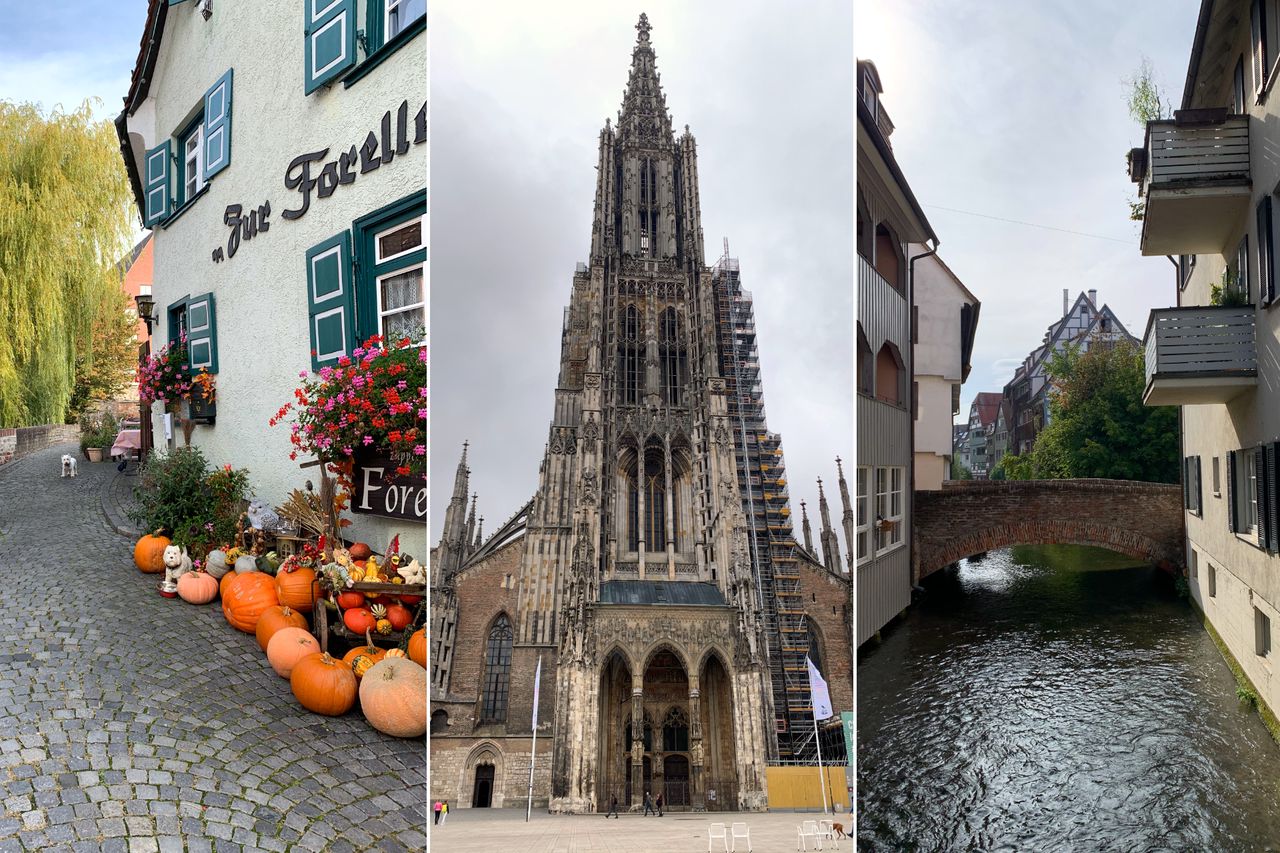