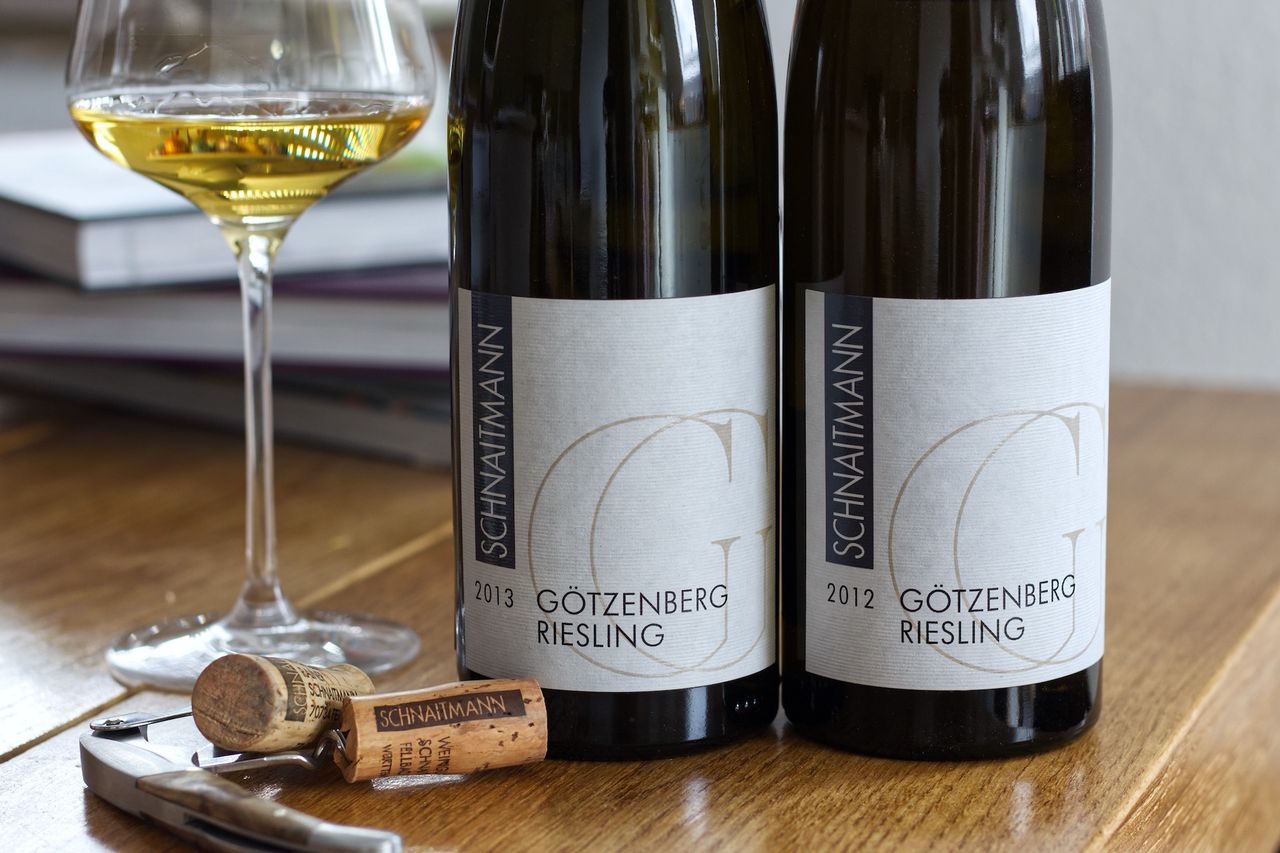 After our short trip to the Palatinate and the 2019 vintage, we continue drinking our way through Württemberg. As a contrast to the very young and fresh wines last week, this time we have two mature Riesling GGs from 2012 and 2013 in our glasses. We drink two wines from the Schnaitmann Winery from Fellbach from the Uhlbacher Götzenberg. The winery is still relatively young, only in 1997 the first vintage was bottled under its own name. In 2006 the winery was accepted into the VDP.Württemberg, the youngest winery of the association at that time. We already noticed that the wines mature beautifully about a year ago at the VDP.Wein.Gut(s).Tour which happend along the garden show in Remstal. At 6 stations across the Rems valley, wineries opened their doors and presented the full range of Württemberg (VDP) wines with guest wineries. I very much hope that there will be a new edition at some point. Unfortunately I was lazy at that time, didn’t take notes and therefore don’t know exactly what we tasted at Schnaitmann. But I do remember the hatch in the cellar where we tasted and that I really liked the wines. Now I am happy to have two mature Rieslings from the winery in my glass.

The Riesling from 2012 starts very full in the nose. It appears almost a bit sweetish, there is some petrol mixed with dark yellow fruits. The ripeness is clearly noticeable. The wine still has acidity, but no edge, at least not on the palate. The acidity is completely integrated and the mouthfeel is really soft. But what is definitely there is a nice length and on the lips it finally shows the typical Riesling pull. There is a little bit of creaminess, a little bit of minerality, a little bit of gum rubbing and tannin out the back. The sweetness from the nose reveals itself in the form of caramel or forest honey and happens with more air and temperature also on the palate. I’m afraid the wine has lost a bit of its liveliness with age.

Totally unexpectedly, exactly this liveliness has resurrected after a night in the fridge. The perfect Easter wine, so to speak. In the nose there is more apple than the day before, spices, butter and more freshness. It appears slimmer, more focused than the evening before. Sure, the ripeness doesn’t disappear, where should it go, but it seems more tidy, sorted, more straightforward. The sweetness remains in the background, but there are notes of brewer’s yeast, lychee, orange lemonade and fir honey. All with more pull on the palate. It’s really a lot of fun, and the fact that a wine that seemed almost a little tired the night before wakes up like this again was really surprising.

The wine from 2013 appears darker when smelling. Very intense, very dense with lots of spice and relatively little fruit. A bit of smoke is happening, a lot of complexity, a lot of depth and quite difficult to grasp. In contrast to the 2012, the acidity is right there. What happens in the mouth is impressive anyway. First it is soft, then comes structure, minerality and then the water in your mouth starts flowing from the edges of the tongue so strong that you don’t know where to put it. Wow! This is enormous and surpasses the other vintage easily in length as well. In the nose you have the maturity, the depth, but on the tongue it feels super fresh, grabs you and rushes forward.

One day later nothing has been lost. Rather the opposite, like the 2012 it has become even more focused. More fruit in the nose, tangerine, very ripe pear, floral notes, and on the tongue more stone, more minerality and structure. The juiciness that moves from the edges of the tongue to the middle has remained. This is wonderful!

2012 is good, especially the second evening, but 2013 was a joy from the first sip. The wine is lively, straightforward and yet has so much depth that you never quite figure out what is actually happening. Whether it’s because of these two specific bottles or because you want to deduce that 2013 ages better than 2012, I don’t want to go too far out on a limb. But one thing that the evening has taught me is that it is much harder to put into words what happens on the tongue in older wines. Practice is missing here!