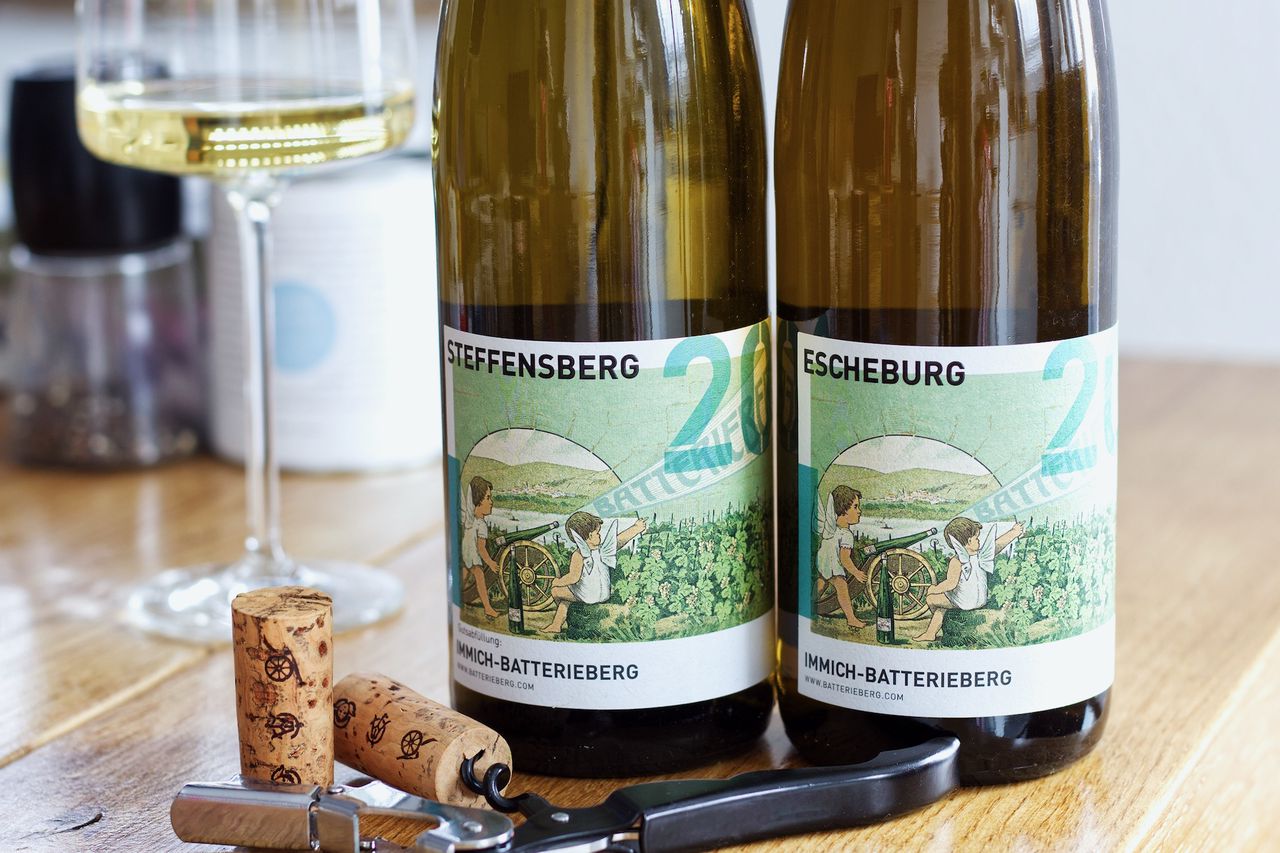 Just like the last bottle of wine on the blog, this time the two bottles also ended up in the cellar after a fair. At last year’s Mythos Mosel we started the second day directly at the Immich-Batterieberg winery and thanks to the accommodation, which was conveniently also in Enkirch, it was no problem to load a crate into the trunk before going home. The winery always allows the wines a little more time. Accordingly, last year the 2017s were presented and they are in the glasses now. We drink a bottle of Escheburg and a bottle of Steffensberg. In the assumption that the two wines are still very young and contact with oxygen could do good, we opened the bottles, poured a tasting sip and then closed them again and let them stay in the fridge for one night.

The tasting sip of the Escheburg is relatively dark in the nose, almost a bit wide, there is quince, apricot, herbs and definitely minerality. On the palate rather meagre, very stony, a little bitter, practically no fruit. The wine already has a lot of pull, is juicy and leaves something salty on the lips. Still feels unsorted.

After the first night in the fridge it becomes much clearer. There is a little bit of creaminess, there is still not much fruit, but if you had the wine in your mouth and then smell it again, there is apple skin, some pineapple and stone fruit. In the mouth it is still sparse and on the cool side. It has become more delicate, especially in the fragrance, there is nothing left of the breadth, not even of the quince. The acidity appears firmer and the wine has a nice length.

One day later there we still have canned fruit in the nose, everything feels a bit sweeter, on the palate more fruit, on the nose more apple, more pineapple and now also passion fruit. But the spice and minerality take a back seat. One more day to observe the change would certainly have been exciting. But the bottle didn’t go along with that, because it’s empty.

The Steffensberg is different: In the first sip there is more fruit, pome fruit, a little sweeter, but also a little slimmer in the nose. Still almost closed. Not much happens on the palate either. There is also apple, a bit musty in between, it appears more elegant.

Analogous to the Escheburg, the first night yields above all delicacy. The mustyness disappears completely, more spice on the palate. Some pears, a very fine fruit and where there was not much going on on the palate immediately after opening, there is now a lot of minerality that remains on the tongue forever. Together with the well-integrated acidity this is wonderful.

One day later it reminds a bit of sour apple rings, in the mouth it is still beautiful, the nose is a bit more open and altogether it appears more complex.

Both wines change a lot over the days and a lot happens in the glass every single evening. It is worth giving the wines time, smelling them again and again, tasting them and then more waiting and enjoying.

Before drinking the wines, I had not looked at the notes of the Mosel weekend, but I did so now while writing this post and it is nice to see that on the one hand the wines have certainly developed further on the bottle, but on the other hand the notes fit quite well despite the many wines on the weekend. So the blog fulfills at least the goal of being a notebook for my own taste memory. What a relieve.